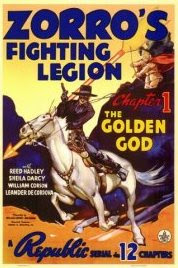 Zorro’s Fighting Legion was the first serial I ever purchased. It was on VHS tape and came in a big honking clam shell case from Kartes video. I really wanted it because it was a double tape and ran four hours so I was getting a great deal of material for my money (This was back when the VHS tapes could cost 80 bucks for a single film). I had to save my pennies and one day when the film was put into a clearance bin I picked it up.

I was in heaven since the serial is an absolute blast.

The plot of the serial has Reed Hadley, playing Don Diego Vega, returning home and finding that the local Native Americans, the Yaquis, were being riled up their god Don Del Oro, a man of gold. Del Oro seeks to drive out the white men and return the area to purely Yaqui control. Of course Don Diego knows something is up and he takes up the mantle of Zorro to fight the bad guys and expose their leader, one of the local landowners who is looking to take all of the gold in the area for himself.

Probably the best of the four Republic Zorro Serials this film has everything you could want from a serial made during the heyday of the genre. It has great heroes, a vile masked villain, wonderful stunts and a pace that never lets up. This is serial that just starts and goes. The only thing missing would be cars or planes which, considering this is a period piece isn’t possible. Once you get past the first chapter this baby just goes and many is the late night when I’ve put this one for one or two chapters only to find I’ve gone all the way to the end yet again. (I have to admit that outside of the Flash Gordon serials this is the one I’ve seen the most)

I know you hate serials because they are all the same or too simplistic. That’s not true. There was once a point in time when they weren’t the result of an assembly line; when they actually told you a real story and did more than just move you to the next cliff hanger (which is something many Republic serials did from the 1940’s on). Zorro’s Fighting Legion is actually a three and a half hour action film on the order of our current summer blockbusters. Actually it’s where the cliffhanging stunts of the current blockbusters came from.

I really like this serial a great deal. To me it’s one my old friends that I put on when I want to simply watch something that if familiar like an old t-shirt.

Currently out on DVD, various VOD services and in the Turner Classics rotation.
Posted by Steve Kopian at February 18, 2012