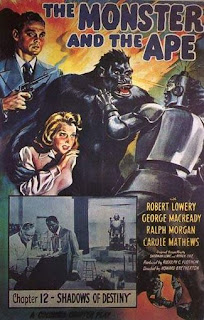 Columbia had one almost never changing rule when they made a serial, there was always going to be 15 chapters. Where universal and Republic mixed it up with any number from 12 to 15, Columbia, with I believe one exception was always 15. The result of this was that inevitably somewhere in the story things begin to happen just to fill space in the later chapters. In the case of something like Chick Carter the excellent story suddenly goes off the rails for the better part of three chapters by repeating things over and over again. In other cases you get some truly nutty twists.

Nutty twists is what The Monster and The Ape is all about. This is a bizarre, often over the top serial that just throws twists and turns out with wild abandon with the result that it’s one of the more enjoyable serial viewing experiences you can have.

Everything is set in motion when 5 scientists make a functioning robot (the monster of the title). Unfortunately, someone, who’s identity is to remain a mystery, feels slighted and plots revenge using a gorilla (the ape of the title). You can see where this is going can’t you?

I thought you could.

Its off the rails from the get go as the bad guy sends the gorilla out to kill the men he believed wronged him. You'll howl with disbelief at the early scene where the scientist goes to answer a knock at his door and is jumped by the gorilla. It's the sort of moment that defines what follows. If you can go with it you're in for fifteen chapters of fun, if not it's going to be a long haul.

To me this is the sort of innocent fun that's perfect for curling up with on the couch when you need to really get away from all of the world's stresses. I think things are way too serious so I suggest getting yourself a pizza and parking yourself in front of the TV and watching this little baby.
Posted by Steve Kopian at February 19, 2012