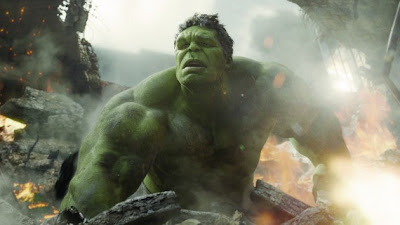 Yea I know this is hardly Unseen. Hell it's one of the most seen films on the planet ever. So why am I writing it up?

Because it didn't disappoint me.

You're probably puzzled by that statement, but yes I am writing the film up because when I finally sat down to watch the film ,I wasn't disappointed. Not only that the film surprised me and moved me to tears despite the fact that I knew or could guess almost every twist and turn.

I really liked this movie.

Is it the best of the year? I don't think so. I have issues with it, but it is one hell of a good time.

The plot picks up not long after Thor and Captain America. Loki is after the cosmic cube (or whatever it's called in the film) so that he can use it to create a portal so an invading army of aliens can come and lay waste to earth. Nick Fury brings together all of the heroes in order to stop the invasion.

You know how it's going to go and you really don't care. We've got great characters saying great things and kicking serious ass, need I say more?

Okay, this whiny man has problems with the film. The film plays like LOTR Return of the King, basically being a film you won't fully get unless you've seen all of the previous Marvel movies in the sequence (Iron Man 1&2, Captain America and especially Thor). The film also leaves out a great many points that should have at least been mentioned in passing (as many others were) such as where the hell is War Machine? Minor points to be sure, but the sort of things that kept me from completely wetting myself over the film...

...that said the film does have several touching moments, and the  one liners made me laugh harder than most comedies I've seen this year. Hulk's line to Loki. putting him in his place had me on the verge of literally falling out of my chair.

Put me on the band wagon of being a big fan of the film.