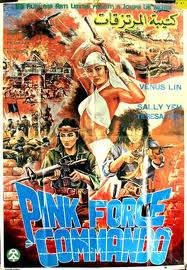 Sequel to Golden Queens Commandos is just as action packed, though much more nonsensical.

The plot of the film begins with a band of women surrounded in an isolated farm house. They have stolen a large horde of gold which the military wants back. They decide that some will make a run for it with the gold while others remain behind. Any survivors will meet back at that spot in a years time to split up the money. Things don't go as planned and the story spirals out into three or ten different directions until we get to the final shoot out.

A sequel in that the same cast plays similar characters to Golden Queens Commandos, but with different names. Also not everyone is on the same side, nor does everyone have as large a part. This film is further tied to the first by the use of footage from the first film to give a kind of background on some of the characters (also to signal which character is suppose to be which from the early film since costumes and appearances have changed).

Very good in a psychotronic sort of way, this film has a plot that makes almost no linear sense what so ever. The plot jumps from gold, to diamonds, to a map, to revenge, to about eight other things depending upon the minute. There is almost no continuity to the whys and wherefores things just sort of happen and people just sort of show up. Its never boring, but it does bend your mind since any attempt at making things make sense is a lost cause. Its so demented that even the giving of one's self over to it only barely reduces the damage, this movie is just too weird.

Like the earlier film this film is a mixture of genres, though to be honest this film is basically a western but with other things placed inside it. (I do have to report that this film does have the musical number the first film didn't have) I liked this film, I didn't love it. The problem is that its scatter-shot approach makes it much more difficult to love than the earlier film. This doesn't mean you shouldn't see it, you should, especially if you're a fan of the wild films that have come out of Hong Kong of the years or an action nut who doesn't care if everything makes sense.