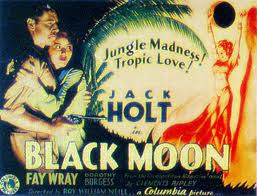 I love seeing a film that I’ve never seen, especially when it blindsides me. Black Moon from 1934 is just such a film. It’s a tense little film that is creepy as all get out.

The plot of the film has Juanita returning to her home, San Christopher a small island near Haiti. She was raised there as one of only a few whites on an otherwise all "black" island. She has felt the pull of the island for sometime and taken to drumming every night. It is hoped that by going there she will be able to find peace. Traveling along with her is her daughter, her daughter’s nurse and her husband’s secretary. Her husband is staying in Haiti.

Things rapidly go from bad to worse as the natives, who view her as a great priestess, are whipped into a frenzy, and with the aide of their high priest blood sacrifices have started again.

A tense slowly building, film the film moves with a dream like logic. Juanita is in way over her head and clearly headed toward a bad end. The doom and nastiness is rampant and it helps that this seems to be have been a pre code film since some of the twists seem to be unlike any I’ve seen in a Hollywood production. The “happy” ending comes at a terrible cost (and isn't all that happy).

The film stars Jack Holt as Juanita’s husband and Faye Ray as his secretary.

This is truly an Unseen gem. Its so good that had I not been with my dad I would have paid to see it again immediately after I saw it.

Keep an eye out for this one.

(And watch out for two WTF moments- one is Fray’s high heels in the jungle. The other is Jack Holt just flipping away a cigarette butt off into space despite being in the middle of his fancy living room.)
Posted by Steve Kopian at August 05, 2012