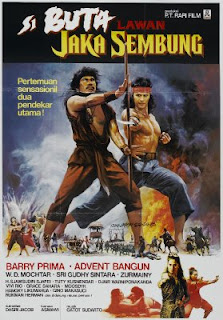 While a good fun film, it is a a let down after the first warrior film. Ultimately it is an action filled, but a bit dumb movie.

This movie begins with a small village attacked by the Dutch. The attackers a routed by Jaka Sembung. This then causes the Dutch to try and find the best man to kill Jaka by having a tournament. Si Buta, the blind swordsman (and star of his own comic and movie series) is the winner. Promised a large reward Si Buta finds and kills Jaka, however the Dutch try to get the reward back and send a small group of men to kill the blind man and take the reward back. Where it goes from there is the movie and I wouldn't want to ruin any of the surprises.

As I said before this is a disappointment after the first film. The action is cartoonish, the make up and effects are just okay. The real problem is that the plot is wildly unwieldy as we have Jaka, Si Buta, the Dutch and Maki to contend with. Maki is an "evil" woman who sold her soul for immortality and has the hots for Si Buta. She also lords over a group of villages and how the Dutch treats her kingdom determines some of her actions in the film.Its too much story being carried by too many "minor characters" (ie. the ones not in the title).

Honestly its not a bad movie as these things go, but compared to The Warrior (aka Jaka Sembung) is a major let down. (I do reserve the right to reevaluate the film down the line.) Taken on it's own terms it's worth a bag of popcorn and a soda.

A word of warning.Despite the films lesser make up effects this is still a bloody movie. Lots of people are shot and killed, there are decapitations, eye gouging, people are graphically crucified and lots of blood flows. Its gruesome. Still if you can get past the blood its a fun movie.
Posted by Steve Kopian at August 12, 2012