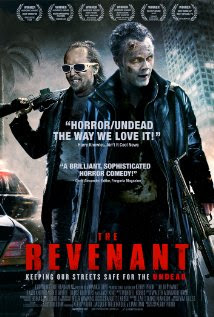 After Bart is killed in Iraq, his body is returned to the US for burial. When his burial is delayed Bart wakes up in his coffin and climbs out. He then shows up at the door of his best friend Joey. Thinking a terrible mistake has been made, Joey takes Bart to the hospital to get checked out, but the staff freaks out and Bart and Joey flee into the night. It transpires that Bart is a Revenant, weird cross between a vampire and a zombie who must drink human blood to stop decaying. He is otherwise the Bart of old. Struggling to find a means of feeding Bart, the pair stumble upon the idea of taking out the city’s bad guys…but things don’t go as expected and thing rapidly get out of hand.

The one question I had when The Revenant had ended was why has it taken almost 3 years for this film to get off the festival circuit and end up with a regular release? I’m guessing the mix of horror and comedy in a kind of action buddy movie confounded studio execs. I mean what exactly is this film? I also expect that the really dark tone and heartbreaking nature of some of the twists make the film a hard sell to people who want just gore and violence. I mean here is a film that is ultimately genuinely about the characters and not about the gore or the violence or anything most “horror” fans gravitate toward, It’s nominally a horror movie but there are no scares, though there are chills.

The second question I had when the movie was done was how long was I going to have to wait for the DVD?

This movie, with the exception of three burps, is one of the best “horror” films of the year.

This film was not what I expected. I don’t think the film is really what anyone expects going in since it spins out in a logical way (more or less) that isn’t your typical horror movie way. Horror is the wrong genreto put it in because other than dealing with an undead lead, the film is ultimately a buddy film/ drama. It doesn't care about the horror as such. It’s a film that concerns the characters dealing with this wild situation and then turning it. You feel for the characters and as things turn black at the end you really feel sad for everyone involved. The emotion is there because the characters are there. When there is a hiccup toward the end of the film the problems it creates mostly come from the fact that some of what happen is really out of character.

Let me pause here and talk about the hiccups in the film. There are three and they are three small blemishes on another wise wonderful film.

The first blemish is the music can be a bit over bearing. It’s not terrible, but it’s occasionally very intrusive and insistent about the direction it wants to pull the film in. The opening title sequence at Bart’s funeral for example it’s a bit too obvious in going for a mood.

The second blip is the small section between the death of Bart until his appearance on Joey’s doorstep. It all plays like bad inde comedy. I groaned at the prospect of this being what the whole film was going to be like. Thankfully it’s not.( Do listen carefully about the story about the grenade which is low and in the background)

The final blip comes toward the end of the film. It’s the later part of the subway sequence from the point people get on the subway to its end. Not only is it out of character for Bart, it’s also a tad too much. Thankfully the film does recover from it and it comes up with a great ending, but for a while there it was in doubt.

What isn’t in doubt is that this is a great film. It’s a film that goes in unexpected ways. While I know you’ll catch some of the twists, I don’t think you’ll catch them all as things that happen early in the film have consequence later on. There were a few things that hadn’t occurred to me and yet were perfectly logical.

Yes, the film is funny. The interplay between Joey and Bart is exactly the way friends act around each other. Their reaction to each other and  their one liners are really funny. And even many of the excellent gross out effects are played for laughs.

A word of warning :while there isn’t a great deal of gore you need to know that if you don’t like blood and gore and vomit (a sick black goo) you may want to steer clear of this because it might turn your stomach. These are some of the best effects I’ve seen in a very long time and they are all the more disturbing as a result.

Rarely, if ever do you see a film as complex as this with in the horror genre, it simply doesn’t happen. Horror films are about the scares and The Revenant is not. It’s not even about the laughs, it’s about the people.

What really surprised me was how you grow to care about the characters. The film, which is effectively devoid of monsters and scares, is all about the characters. You care about how the friends come together (“Why didn’t we do this when you were alive?”) and deal with the women in their lives. You feel bad for Janet- Bart’s girlfriend- not only because the situation is no win, but also because it becomes clear really fast Bart may love her, but despite the kind words, was never going to marry her even when he was alive.

I really need to see this film again. Normally I would say something to the effect that I don’t want to tell you too much about a film for fear of ruining it, however in the case of this film I need to see the film again because I know I didn’t catch all that is going on. Yes the basic story is good and if you just watch it on a popcorn level its fine, but there is more going on. Even on the most basic of levels I didn’t catch how everything in the in the film ties together. I know that there were stray lines at the start that will add to things are the end that I didn’t register because they didn’t seem important.

If I could I’d wait until I saw this again before I reviewed it but right now that’s not an option. Right now I need to you run out and see this film when it opens in limited release Friday. Go see this film. Let go of all your expectations and just go see this film. If you can let the film be what it is on its own terms I think you’ll find you’ll be pleasantly surprised 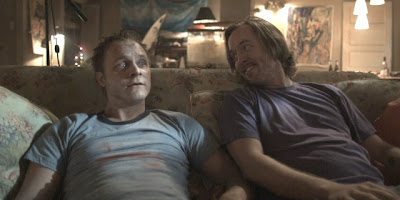