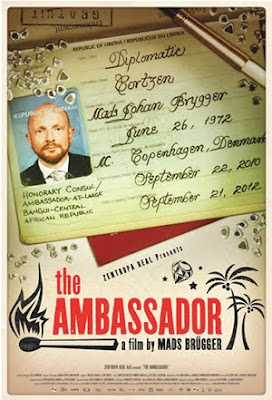 The story of what happened when filmmaker and journalist Mads Brugger bought diplomatic credentials from Liberia and went to the Central African Republic.

One of the problems with doing Unseen Films and having a day job and a life away from the cyber and film worlds is that you can’t see everything you want to. For all the good things that Unseen throws our way we still miss a great number of things we should have caught earlier. For example I should have caught The Ambassador when it played at New Directors New Films because by the time it was done I had so many questions I wanted answered.

As I said at the top the film follows Mads, cigarette holder forever clenched in his teeth, as he buys his way into diplomatic service. The idea is to try and get access to money and diamonds while trying to “build” a match factory. What he gets instead is a bizarre trip down the rabbit hole. Freely throwing around envelopes of happiness, envelops filled with money, he winds his way deeper and deeper into the inner circle of power in the Central African Republic. Things also get weirder and weirder as he finds various people who tell him stories about the real way things are done. How weird? People in the Central African Republic actually think that someone in their right mind would sign a contract that forces them to pay for someone else's expenses forever, for a promise, maybe, some day, they may get diamonds in return. 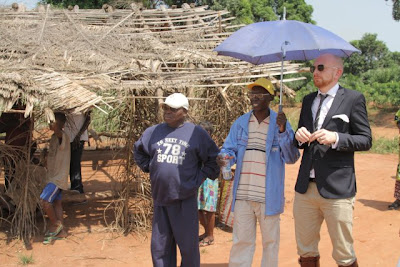 The film tells a wild story and by the end of it I was full of questions that weren't clearly answered or simply popped into my head.This isn’t to knock the film, oh dear lord no, I only mention it because the film is so rich in characters and incidents that the brief 93 minute running time is horribly too short…

…on the other hand I can’t imagine a longer version of the film simply because to tell it any other way would be to have the film spin out uncontrollably in all sorts of weird directions. The best thing I can say is there was ever a film in desperate need of a commentary track and bonus documentaries this is it. This is a story that bleeds off the screen on the the floor and into your mind.

The fact that the film fills you with questions, and a desire to know more puts this into the elite group of great documentaries. Good documentaries tell you things you never knew. Great ones take it step further and make you want to get involved or know more. The Ambassador makes you want to know more in the right sort of way, it wants you to continue the story, not just to fill out things you were never told.

What is also really clear is that the whole notion of what diplomats do, beyond the main ambassador, really needs to be rethought. I mean the way it looks is that all these guys do is run scams or near scams in the hopes of making a buck.

I wish I had gone to New Directors.Actually I wish I had a chance to sit down with Mads and ask him a steady stream of questions.

If you care about knowing how things are done, really done, you should see this film... on the other hand if you want to see a true story that will amuse the hell out of you see it as well. 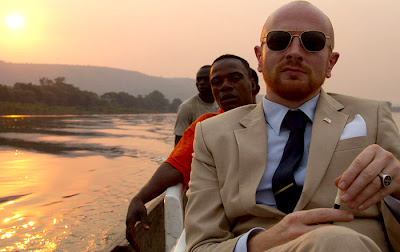