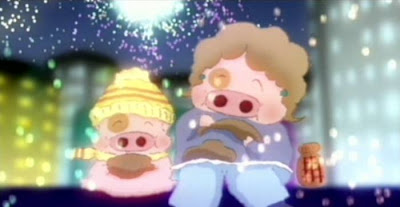 Hong Kong animated film that concerns the reflections of an older McDull, seen here as a pig, back on his life as a five or six year old. Its a combination of live action, 2D and 3D animation that could only have come out of Hong Kong.

Beginning with the birth of McDull this film then jumps to his arrival in school and then goes from there. McDull and his mom seem to be taking on the world alone and we see how she struggles to raise her son and get by as McDull is seen to be both unaware of the poverty that he was living in (as the child) and yet as the adult he's keenly aware that his mom was doing the best she could to raise him as a single parent. It manages to both captures the bliss of the innocence of being a child as well as the melancholy of how the knowing adult looking at the same situation would see it. It warms and breaks your heart at the same time.

Absolutely a great film, the films one real flaw is that its a bit too disjointed. The pieces don't always fit together or lead into each other in such away as to make a unified whole. I was hoping that in the end it would all come together and while it didn't quite the final piece manages to wrap it all up nicely.

Largely unavailable outside of Asia this film really needs to be seen elsewhere in the world. I understand why the film hasn't been seen in the US since its "manage to have it both childlike and adult" style would be off putting to a studio who wouldn't know how to market it. But considering that the film spawned multiple sequels, a TV show, Karaoke discs, a toy line, and more in Asia one would think that this is truly a movie for everyone (its mix of adult and kids humor makes it almost a movie one could grow up with)

If you love great movies see this film.
Posted by Steve Kopian at August 30, 2012