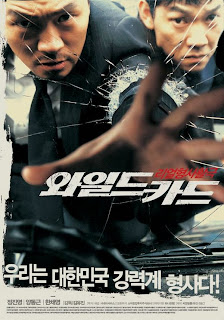 In Wild Card a group of police detectives try to find the identity of a gang of muggers who are killing people in the course of their robberies, while also dealing with their other case loads and with their lives at home.

On many levels this movie is a run of the mill police action/comedy. There really aren't any unique twists or anything that in and of itself that makes its special. However, the combination of great acting, great characters, a good script and a well done production all come together to make a damn good little movie. While it may not strive to hit one out of the park for a grand slam home run, it does come up with a nice inside the park triple.

Th violence is intense of the hand to hand or inanimate object to body sort. The police are hesitant to use their guns since it seems cause protracted investigations which ultimately get them into trouble. The result is lots of fist fights and beatings.

The humor is almost constant, with everyone busting on everyone else with a steady stream of one liners. Its clever and amusing and having spent a good deal of time around police I've found it on target, although I've never heard of cops dickering over who's going to get the collar while the suspect shakes his head at the craziness of it all.

The film has taken some heat for being very meandering and not being a speedy rush against time. Some people don't care that the film focuses on other things. For the most part I liked that the film wasn't 100% focused on the chase. I liked that the cops dealt with the crimes as I've seen them do in real life, namely going after all leads they have, while also being forced to pursue other crimes. Rarely do cops have one case, and rarely are they so dedicated as to never go home, or not to try to pick up a pretty girl on the street. I liked that there were lulls by the killers where they couldn't be found. And I liked that there were times where the cops sat on bored on stake out while absolutely nothing happened. Still I do have to admit that some time in the second hour there was one or two moments where the meandering did take its toll and I did wish the film would move forward just a tad faster (forgetting of course that I was enjoying what ever digression we were in the middle of.) Yes, this is a run of the mill, you've "seen" it all before sort of movie done with enough style and skill that if you take it for exactly that you'll have a good evenings entertainment. If you're looking for the next big thing, or two hours of breathless excitement, look elsewhere. If you just want two hours of laughs and police style action this is the ticket. This is a movie thats the run of a very good mill.