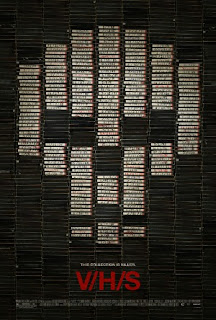 I'm not going to waste your time with a review of V/H/S, which arrives in theaters in September, since the talented filmmakers involved and the built-in quasi-gimmick -- it's a horror anthology made up of "found footage" -- has already attracted plenty of ink since its Sundance screening and is sure to prompt more in the coming weeks.

Besides, the value of any given reviewer's take becomes more perilous when anthos are involved as everyone's internal calculus regarding what's worth seeing is bound to be different. For example, if but two out of five stand-alone segments are worthwhile, but they're really worthwhile, does that make the entire film deserving of your time and cash? Maybe. Other viewers may demand three or four solid segments, a proportionality that's hard to achieve in any horror antho not entitled Kwaidan (1964) or Tales from the Crypt (1972).

Still, in true contrarian fashion -- contrary to myself, not any critical consensus, mind you -- I'd like to say that V/H/S is definitely worth catching, and not only for horror fans but also for cineastes generally... despite the fact that there's absolutely no question that I found it disappointing.

So why the endorsement? In short, its global failures are pretty darn fascinating.

Here they are, all two of them:

1) The chief experiential thrill of any found-footage film is, to use an overworked phrase, its immersive quality: we are fully there, partaking of an artful dissolution between film-reality and reality-reality. Consequently, there is no "filmmaker," no discernible "style" even. Not when we're in the moment. (The [REC] films excel in this regard.)

Yet in V/H/S the stylistic tendencies of the individual directors are more pronounced due to their very juxtaposition in the same film. Sure, we expect there to be differences across the segments (and V/H/S goes out of its way to include some change-ups)... but when we quite easily pick up on the diverse sensibilities of the filmmakers, we become and remain conscious of the artistic impulses behind the entire enterprise, and are thus reminded that we're watching a film. With a single director, yes, we may recognize certain signature touches, and even more so later, upon critical reflection. But when we're right in the midst of any truly effective found-footage horror flick, we forget that there's a director out there who's orchestrating everything. In V/H/S, we might occasionally experience a similar forgetfulness -- but it's shattered the next time a new artistic approach appears on the screen. We're never allowed that sustained plunge into a single director's authorship such that we eventually come to forget we're watching a mere film.

2) If V/H/S had been constructed as a single narrative under the guidance of multiple directors -- which would render it not an anthology film, I realize -- then the found-footage aesthetic would have worked much better.

Because then the audience would have been treated to a consistent point-of-view. Yes, every film inscribes, and subscribes to, a specific point-of-view, or a shifting (but still specific) audience surrogate. But in V/H/S, the constant change in narration/authorship (remember, each segment is ostensibly shot by a different character), pops us out of the filmic reality of any given segment. (In a sense this is the same argument as in #1 above relocated to issues within the narrative -- here it's the jumps in character POV, not in filmmakers, that undermine found-footage's this-is-real conceit.)

And that kind of sums up the lose-lose proposition that V/H/S represents: the more aware the audience is in terms of cinematic basics, the less likely it is to enjoy the actual movie...

All right, that's the end of point #2, and, really, the point of this whole piece. I have no doubt that you'll encounter plenty of reviewers who applaud the creativity and/or execution of the individual segments in V/H/S. However, at the risk of advancing a psuedo-ad hominem attack on such critics, I'd like to suggest that they've sacrificed a deep experience of the overall film in favor of an appreciation of the smaller pleasures to be had from each segment's distinct plot twists and moments of scariness. I guess that I, in hope against hope, maintain that found-footage horror is capable of so much more...

That said, and sticking with the notion that any such found-footage antho is inevitably less than the sum of its parts, I'd still like to recommend V/H/S as an on-demand option when it becomes available on August 31. Am I contradicting myself? Again, maybe. But I feel that even found-footage horror that I'm less than impressed with (e.g., Grave Encounters) is better suited to the intimacy of a home screen at 1:00 am than a big screen at 8:00 pm.

Moreover, all those jumps in POV and artistic control -- well, we're kind of used to that when watching TV, aren't we? And that's the experience that V/H/S via VOD promises when it bows at the end of this month. So please, by all means check it out -- just make sure that you can mentally partition each story and each filmmaker as much as possible. The use of pause buttons and bathroom breaks is encouraged.