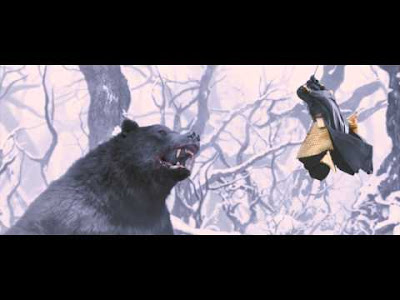 Xun Zhou, who was dynamite in The Equation of Life and Death, is a Fox spirit looking for hearts (both romantically and for food) in Painted Skin The Resurrection. More an action romance  rather than anything else (it certainly isn’t a horror film), this is spectacular film that will benefit from being seen on the big screen when it opens for a limited US release tomorrow (8/17).

The plot of the film has the Fox being freed from her icy prison by a bird spirit. The pair then goes off causing mischief and eating human hearts along the way. They eventually run across the Princess Jing, who is traveling country to find the object of her affection, a soldier who years earlier was unable to stop a bear from disfiguring her. Fox takes the position of handmaiden to the princess and soon there is a romantic triangle forming between the two women and the warrior. Meanwhile the bird spirit finds romance with a slight inept demon hunter…as followers of a necromancer begin to take steps to restore their prince who’s heart was eaten by the Fox.

If that isn’t a perfect reiteration of the plot you’ll have to forgive me because the film isn’t completely interested in plot. The film is more interested in providing spectacle and dealing with the emotion of the romance, with the Fox and Jing changing bodies so that they can experience the things they feel they are lacking- love.

As a romance the film is quite good. Yes, it’s pure soap opera, but the cast hits the right notes and you feel the longing by all the parties. By the time there is a declaration and demonstration by the warrior that he will love Jing for what’s inside (that’s not a spoiler trust me) the non-stone hearted members of the audience have been reduced to mush.

The real strength of the film are the incredible spectacle and action sequences. A computer enhanced throw back in many ways to the wire work epics of the 1970’s there are several amazing action sequences. For example the first meeting of the Fox and the disguised Jing is a wonderful set piece off and on horseback as Jing tries to save what she thinks is a kidnapped girl from a bandit. Later on the huge assault on the fortress lead by feral man-beasts is the sort of thing that makes you go "oh wow repeatedly". Both pieces are a fanciful blending of real people on wires and computer manipulated images. The result are sequences that are fantastic in the truest sense of the word. The visuals are amazing and, as I said at the top the sort of thing you’ll want to make an effort to see on a big screen.

The strength is also the weakness with director Wuershan, who was previously responsible for the messy The Butcher, The Cook and the Swordsman, choosing to accentuate the set pieces instead a cohesive plot and thus taking a toll on the overall film. The sequences are wonderful, but the fact that the they don’t always link up the way they should makes the film seem almost like an overlong long highlight reel. It doesn’t kill the film but it makes what should have been a great film simply a good one. I suspect that the focusing on the set pieces was a necessary evil since in the second half of the film the sheer number of characters and plot threads threatens to break the film into a million pieces.

I like Painted Skin Resurrection and wish I had gotten to see it on a huge screen where the epic quality of the film could really have dazzled my eye. (I'm hoping to see the film again during it's New York run over the weekend)

I should point out that this is a kind of sequel to 2008’s Painted Skin which starred Donnie Yen, as a man caught in a love triangle where one part is the Fox spirit (Xun Zhou again). You do not need to know anything about the earlier film which is only referenced here. I should point out that several actors carried over from the first film but not Donnie Yen.

I should also point out thatthe film is currently number one at the box office in China.
Posted by Steve Kopian at August 16, 2012