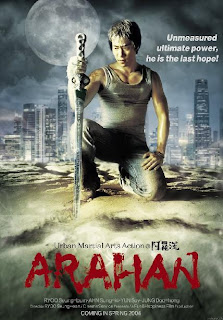 Korean action comedy that has trouble blending the two.

This is the story of the Seven Masters who recruit a bumbling police officer into their group in order when its discovered that he possesses a high level of Chi. The timing is very fortuitous since an ancient enemy has awoken and is once more spreading evil in the world.

When I first read about this movie several on-line reviews said that this was destined to be the next big thing. Later reviews were positive, but were less glowing noting that the film has several parts that don't fully mix together. I'm in the camp with the later reviews since I find the mixture of styles works against the parts.

I should begin with the action. If you want to see great action this is the movie for you. Hand to hand and weapons such as swords are used through out the film to great effect. Sure its done with wires and computers, but it doesn't matter since its so much fun to look at. Very often you watch the madness on screen and go "OH Cool" even though you know how its done. I loved when our hero throws a cup at the villain who catches it on the flat end of his sword, and then sends it spinning back with even more force. Amazing.(You really should try this film for the action if nothing else.)

The humor in this film is both knowing and very funny. The opening round-table of the masters discussing the difficulty of training is priceless, especially if you've seen any number of other martial arts movies. There is a nice friendly edge to it, that is mostly right on target. The problem is that our hero is often much to bumbling to be believed, especially after he's been in the training program for a while. The too slapsticky attitude is what really hurts the movie since there is no natural progression, just silliness for silliness sake (The ending for example).

The cast and the characters are great. These are people you can really root for. The villain is also suitably evil.

If you were to take all of the movies parts and look at them separately you'd be amazed at how good they all are. The problem is that when you put the bits together the film doesn't quite work together. As I said the slapstick doesn't hold up all the way through. The film is overly jokey at times, even in serious moments. Its hard to keep a light edge when characters are spewing blood and being run through with swords. It takes a bit of the love for the film away and leaves you with admire and simply like. The film also suffers from a pacing problem with slow period in the middle with the training bookended by a funny beginning and an action packed end.

Still I think you should give the movie a shot especially if you like action movies, especially when they have a humorous side to them. In all probability you're going to be like me and like this movie, but you won't love it
Posted by Steve Kopian at August 08, 2012