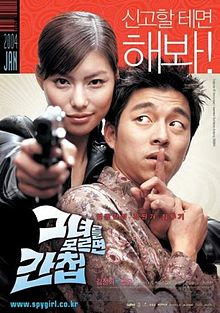 Let me say it up front, this is one of the most romantic films I've seen in ages. Its also wonderfully, sweetly funny. And at risk of cursing myself I want to say that its a chick flick that guys will love too.

The plot of this film has a young beautiful spy from North Korea going south to capture another rogue spy. She goes undercover at Burger King and soon she's battling with her co-workers for the affections of the local boys, dealing with a culture clash between North and South, and a very cute young man who's posted pictures of her on a website of local "angels" possibly blowing her cover.

How do I describe this film? How can I sell this with out over selling it?

This is a great little film. Its a small little confection that will make you smile and feel good and give a big hug to the one you love.

The comedy is broad at times, crossing into slapstick, but more often than not its very clever. A good deal of it has to do with the fact that our heroine is a spy and can kick everyone's ass,only they just don't know it.

The romance... What can I say, its almost dead on perfect. What can I say about a modern film where they create tension as to whether two people will simply hold hands?

No, its not perfect. The problem is that some of it is so goofy, in particular the sub-plot about the loan shark and the old spies, that it seems to be part of another movie. The other movie is good, it just doesn't fully mesh with the one we're watching.

I can't recommend this movie enough. Its a wonderful fragile little creation that will make you feel really warm and fuzzy for all of the right reasons.