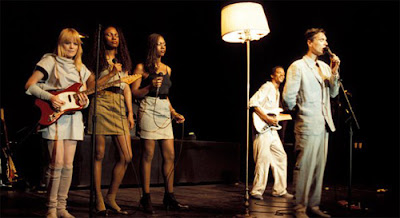 Does anyone younger than a certain age watch Stop Making Sense any more?

Jonathan Demme’s record of a Talking Heads concert (in reality it was sewn together from several performances) is easily one of the best concert films of all time.

The structure of the film is a reflection of the show it self, beginning simply, David Byrne walking out on stage with a guitar and a boom box and singing Psycho Killer. Then over the course of the next 90 or so minutes the music builds bigger and bigger as more and more people step on stage to join the fun. It eventually becomes a grand party on stage.

Byrne and Demme’s structuring of the set list as an ever building wave of sound and fury sounds simple, but it’s damn near impossible to pull off. I’ve seen people try to do similar things over the years and it doesn’t always work, mostly because the selection of songs is poorly chosen, usually with one down beat song thrown in at the wrong time. The music here is spot on perfect with many of the songs, Life During Wartime, Take me to the River or Girlfriend is Better sounding way better than they ever did on vinyl or CD or whatever.

Demme’s style, all but ignoring the audience, puts us very much on stage. We’re there with the band, a part of the party. It’s a glorious experience that almost every other concert film you’ve ever seen fails to duplicate.

This is a great great film. It was a quiet game changer that altered not only how concerts were filmed but also staged. If you want to know how influential this film is watch how Byrne and the band move on stage and compare the performances here to what many of today’s performers are doing and you’ll find that they are cribbing stuff from this film.