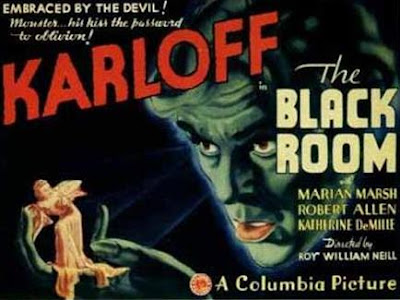 The Black Room is a double dose of Boris Karloff, with the great actor playing twin brothers. The oldest and healthy one assumed the title baron when their father died. He is an evil SOB with designs on everyone’s wealth and women. His brother, cursed with a paralyzed right hand is a wonderful person that everyone loves. When the Baron calls his brother home, it is with the intention renouncing his title in favor of his brother…whom he intends on killing in the black room of the title.

There’s more to it than that but that’s enough to get you going.

A pot boiling thriller with some horrific twists, this is Karloff at his most manic. As the evil brother flies off the handle and continues his trail of murder and deceit it’s joy to be hold. To be certain you can pretty much guess where each twist is going to take you, but at the same time you’re having a great time watching how it all plays out with some neat little flourishes.

I really liked this film a great deal and Brooklyn Academy of Music’s recent pairing of this film with Black Moon on a big screen was a real treat. Its not often we get a chance to see films like this on a big screen so any chance to do so is a real treat, especially when it’s something starring Boris Karloff.
Posted by Steve Kopian at August 04, 2012