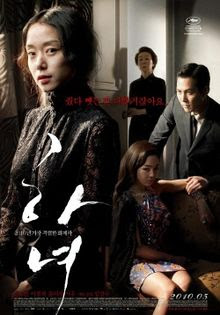 Off base remake of a classic Korean film concerns a young woman who gets a job working for a rich family and quickly ends up a mstly unwilling target for their games and, in the case of the husband, advances. It's soon a descent into depravity as she finds out that the rich aren't like other people.

Since the original was made in 1960 I'm guessing that the film amps up the sex and violence- I'm pretty sure the ending isn't as graphic. Having not seen the original I know the ending of this one left me kind of staring at the screen, and had me playing it again and again on my IFC in Theaters screening.

As for the rest of the film I'm not sure what I make of it. The film is certainly crafted for effect- it's aiming to make us all feel uncomfortable- and it does from the WTF opening straight on until the ending. Is it any good? I don't know. It did have an effect on me but at the same time I felt manipulated. What happened- outside of the end- or the almost the end wasn't anything I couldn't figure out.

The film is being promoted as rather sexy and it is, but to what effect. It seems more like a calculated move rather than something natural.

Can you tell I'm mixed.

I'm guessing that had the film not be so heavily promoted the last few months as a hot film in some circles I might have liked it more. As it stands now. Its okay, but nothing special.

Your milage will vary.
Posted by Steve Kopian at August 10, 2012