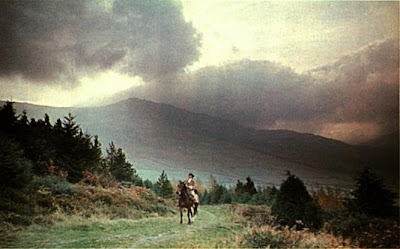 Of late there seems to have been a rediscovery of Stanley Kubricks’s Barry Lyndon. Several theaters in New York, including Lincoln Center have played the film. Many of the biggest film fans I know have come out to say how much they really like the film, with some going on about how happy they were happy that the best of Kubrick’s films finally got a proper restoration on Bluray.

Is the film that good? Is it the unheralded jewel in the Kubrick catalog? Is it a film that should be the source of high fives between film fans who discover a shared love of the film?(as it was with an acquaintance in a bar recently)

First off the film isn’t unloved or unliked. Too many people I know love the film for that. It is simply un-talked about, the question is why is that?

I’m guessing is it’s the least sexy of Kubrick’s films.

Paths of Glory has Kirk Douglas and is a stinging antiwar film.

Spartacus is a huge Hollywood epic

Eyes Wide Shut is a mess, but it’s his last film.

Barry Lyndon doesn’t fit into any of that line up.

Lyndon is a 18th century period drama based on a Thackeray novel with a lead actor, Ryan O’Neal, many people consider a joke. It’s a film that seems to be the red headed step child of all of Kubrick’s films. It’s an epic film that somehow seems strangely warm and personable which Kubrick's films are only in fits and starts.

Warm and personable?…no it is. Really. Consider all of the other Kubrick films and you tell me where you see another film that doesn’t feel like you’re an observer in an almost sterile environment? Maybe, perhaps Spartacus, but even that suffers from the fact it’s a huge film that you are distanced even in the close ups. Kubrick’s films aren’t so much movies as clinical studies masquerading as feature films. His films are people under the microscope, or in the case of Clockwork Orange one man’s version of the truth, slightly less clinical than all the rest, but still a case study in a life.

Which thinking about it would seem to indicate that had Clockwork not been made we would never have gotten Barry Lyndon. Think about it, Clockwork is the least sterile, least Kubrickian of his films to that point. You have film that has dirt and grime and doesn’t look completely perfect. You also have a voice over that rips control of the film from the director and puts it into the hand of Alex.

What other film is like that? Only Barry Lyndon.

Actually Clockwork and Lyndon are probably the first Kubrick films with any real human characters (Spartacus excepted). Yes I know you have an odd character here and there, say Peter Sellers as Mandrake or Slim Pickens in Strangelove, but outside of that there aren’t many real people. Kubrick seems more interested in using the characters as props (everyone in 2001) or mouthpieces (Kirk Douglas in Paths of Glory). Clockwork has Alex, who bends the characters in his telling to his own devices, and Lyndon has pretty much everyone behaving as if they can control their world. Sure much of what we know about the characters comes from the narration, but at the very least it fills in emotional details that we’d never get otherwise (or, more importantly, in any other Kubrick film)

Barry Lyndon is the story of a rogue who is forced to flee when he kills a man in a duel. He ends up in the army, and after saving his commanding officer he begins climbing the social ladder until he marries a rich widow. It’s not a happy film. Lyndon is a scoundrel and rogue, not of charming variety. Things go wrong and by the time we reach the end no one is particularly happy.

Atypically to Kubrick’s film this is his one film that doesn’t seem to have a subtext. The film is the story of a rogue. It feels like it’s source, a Thackeray novel come to life. It doesn’t seem to be a film that is about anything beyond that. If you look at Strangelove you have a critic of the arms race, Paths of Glory and Full Metal are about the absurdity or war. 2001 is about everything or anything you can fit into it. Eyes Wide Shut is about lust and personal relationships. Clockwork is about society and it’s outcasts. Lyndon seems to be just a ripping pot boiler. Of course it has a great deal going on, much like the source novel.  Its a film that is deeper than many of his others with details across the entire three hours fueling the themes and subtexts. If you want to talk about the film in detail you have to really pull the whole film apart.

I suspect that people don’t talk about liking this film because it doesn’t seem like you’re liking one of the cool films. Its not a film where you can easily argue the deeper meaning of what’s going on…additionally as I said earlier it doesn’t have humor, violence or trippy images that draw people to other Kubrick films.

Related to that I think people aren’t talking about it because to like the film frequently means you get shouted down by a fan of one of the other films who never tires of repeating lines like “Open the pod bay doors Hal”, “Here’s Johnny”, Or “What kind of Malfunction are you?” I’ve gotten shouted down by any number of people who love to state how clever they are by liking one of Kubrick’s bigger films and stating and restating the obvious points about why those films “rule”.

Lyndon is not a film for all audiences. Its slow, long and very much from another time. There are few duels, a battle scene or two, but mostly there is just people and talk. The music is several centuries out of date. Other than someone looking for a good film, regardless of the type, most modern audiences are not going to watch it. I mean Ryan O’Neal is the star, what’s he best known for these days? Being Tatum’s dad and Farrah Fawcett’s boyfriend.

Why do people like this film? Because it’s the most human sized of his films, even if it is a huge epic.

I really like Barry Lyndon. It’s probably tied with Clockwork for my favorite Kubrick film. Admittedly it’s not a film I watch often. It is not a film for casual viewing, it’s a three hour and four minute commitment. The joys of the film are in devouring the whole film, and not coming in 25 minutes in or popping in a favorite scene. And there are no favorite scenes or sequences, there is simply the whole film. You can’t pull it apart. (another strike against it in many people’s eyes). With every other Kubrick film you can discuss one scene or another (war room, Beyond Jupiter, The record store, Kidman's monologue), I dare you to try and discuss one scene or sequence in Barry Lyndon as a stand-alone dissection, you can’t do it. Everything in this film ties to something else.

It’s a masterpiece in the truest sense of the word since it’s a film that requires you take in on in total or not at all. (another reason people don’t want to discuss it, it’s too big a thing to talk about fully)

While I understand why people seem to shun Barry Lyndon, at the same time I’m tickled pink every time someone professes that they love the film. It’s so nice to know that I’m not alone in the world and that there are people out there who really do like good movies and understand that sometimes you have to look beyond the flash in the pan.
Posted by Steve Kopian at August 12, 2012