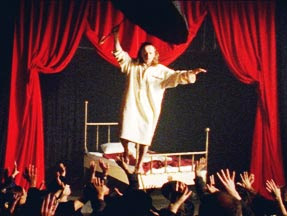 Tomas Kubinek's film for the CBC has at last unspooled before my eyes. I had to order a copy on VHS from a Canadian film service but I got my hands on it.

Tomas Kubinek is one of the greatest clowns I've ever seen. He is a sad sack sort of clown who seems like a twisted Sylvester McCoy with a dash of Chaplin and a dollop of Keaton. The man is an absolute genius, its a statement I don't make lightly nor with out a huge grin on my face.

The film is an opened up version of one of his stage shows called Bed, which I've never seen. It concerns an insomniac cabaret artist imprisoned in his hotel room.

The film is 45 minutes long and is... interesting. Honestly it doesn't really work through most of it. I don't think opening it up really worked (not that I'd know since I didn't see the source material).

That said the last 10 or 15 minutes are transcendent and hopeful in a way only Kuby is uniquely capable of expressing, the trouble is that there is 30 minutes of "what is this?" before it. Yes you get to see the great one do his stuff but its so bleak and disjointed. I can recommend it for fans, but others beware... its a Kafka nightmare with a hopeful end...

(Yes I am very Happy I purchased a copy, I just wish it were better. Hopefully I will get to see the source show someday- clips are at Kubinek.com and play so much better than this film)
Posted by Steve Kopian at August 27, 2012