David Cronenberg and his Cosmopolis (2012) at Lincoln Center (SPOILERS) 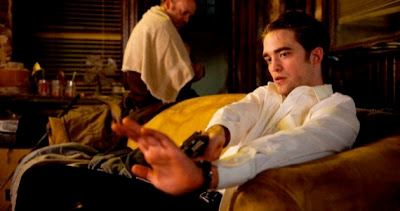 My immediate reaction to the film  was a desire to leap to my feet and scream at the director "You can't be serious!!!!!!!" in my best John McEnroe voice, but I found I just didn't have it in me to get the tone and inflection right, so I let it go. I quickly found out that, yes Cronenberg is very serious about the film, lifting all of the dialog directly from Don DeLillo's novel. But as much as he talked about what works on the page not always working on the screen (One character's diary was completely removed for that reason) he never realized that DeLillo's perfectly crafted dialog sounds(the wrong sort of)  laughable when actually said aloud.

But I'm starting in the middle yet again...

Last night after the 630 showing of Cosmopolis David Cronenberg was going to sit down for a Q&A so I got myself a ticket and went. I figured what better way to see the film than with the man himself there. Ten minutes in I was ready to congratulate him on finally making the comedy he talked about last year at the New Yorker Festival, but I was ready to go McEnroe on him.

The film concerns Eric Packer (Robert Pattinson), an uber rich kid who has made billions and just married an old money girl. Disillusioned and trying unsuccessfully to corner one of the currency markets, he heads off to get his hair cut on the other side of Manhattan just as the President comes to town and anarchists begin wandering the street. During the very long trip people talk, have sex, die and our hero has a six minute prostate exam while trying to pick up a woman.(Cronenberg said he told Pattinson that when he gets his prostate checked and if it should last more than a couple of seconds, assume your doctor is in love with you)

Its a strange film filled with deep meaningful dialog about deep meaningful subjects. After Cronenberg had read the book he pulled out all of the dialog and used it for the script. The trouble is that no one, no one talks like this, not for an entire day and not with everyone they meet. Flowery and meaningful doesn't describe half of it...pretentious twaddle does.

Understand, I like the discussion, I love the intelligence, but it's unconnected to real people, even movie real people so it all comes out as a polemic of spiritual exploration instead of a drama...er comedy...black comedy.

Yes the film is funny. Much of it is intentional, the weird refrain of "I have an asymmetrical prostate" brought more and more laughter each time it was intoned. The bizarreness of the whole situation is damn funny at times and I got several good belly laughs from the film.

The film is also funny frequently for all the wrong reasons. Blame Cronenberg who seems to have followed what by all accounts is a novel with a touch of mystical dream logic too closely. People come and go randomly. Events just transpire almost on a whim. The setting, Packer's limo, travels through a city that is so fake and artificial as to seem to be the work of a hack director. At no point does the film have any connection to a New York City that I've ever run across on any level, and I can accept that, but the street scenes are so ludicrous that even even the worst TV show you've ever run across would have reshot them.

(And I won't go into the awful green screen compositing that makes the film so unbelievable and unreal that I for one never bought any of it for an instant.)

Do I dare even discuss the story progression, which has Packer's life going farther and farther down hill, until a moment when something happens that was so unexpected and so out of left field that the people around me chattered that they never saw it coming (and that it woke a couple of them up). Why Packer does what he does is anyone's guess. I'm guessing it, it worked in the novel, but here it comes across as an effort to wake the snoozing audience (no really people around me were sleeping) and to move things into the tragic final third. After the WTF moment the film then twists and turns in a couple of different ways, with a couple that make no sense before there is long talk between two characters that lasts roughly 25 minutes (That's Cronenberg's timing).

What happens is kind of foreshadowed, but at the same time it really makes no sense.This isn't a whole journey, but unconnected moments from it with the result that nothing matters. Any grand revelations are lost because there are no whole characters only ideas.

I love the ideas. I do. I love the intelligent discussions about life, the universe and everything but that's all there is. There are no real people here... well maybe Packer kind of is one in the end and so is Benno, but their climatic discussion needs a better first 75 minute for it to have any real emotional power. I felt nothing except contempt and boredom and a desire to see Paul Giamatti and Robert Pattinson go at it in a film with a better set up (and yes Pattinson is really good and holds his own and then some with Giamatti)

To be honest I can't fathom most of the raves I've read for the film. What are they responding to? Have they read the book and thus know more about the characters? They must have because the film feels like it's only part of a story not the whole thing. On the other hand, while I don't hate the film, I completely understand the foul words that have been thrown it's way.

The film is a mess.Its a bold brave attempt but it really misses the mark.

After the film Croneberg came out and talked for a bit. Interviewed by Richard Pena of the Film Society of Lincoln Center he came off a man well at ease with public speaking. He also seemed a tad rehearsed with some of the answers sounding stock since he said similar things when I saw him a couple times last year with A Dangerous Method.

He talked about being brought in on the project by a producer who gave him the book at Cannes. He talked about how after he finished the book how he started pulling the dialog from the book to see if it would work as a screenplay. He spoke of the casting, which he said was done in part because of the visa requirements for shooting in Toronto. He spoke a great deal about Pattinson, who was hesitant to take the role and who's uncertainty worked well in the film.

Cronenberg stated that he was finding that the audiences seemed to be getting the film and what he was doing, even the Twilight fans. He indicated (in response to an audience question) that the film was made with an audience in mind, but was also made because he wanted to make it. It had to please him first.

Cronenberg's discussion of the music, it was done with Howard Shore in conjunction with the group Metric was, by his telling the first time that he had been asked that but I've read a couple things on the film where he had discussed it.

There was also a discussion about shooting in a confined space and how keeping much of the film in the limo made the film work better for him.

Cronenberg was asked about what it was about him and his films having people having sex in cars. Cronenberg repeated his line that it was the only place he could have sex before retelling some stories about the making of Crash including the one about Ted Turner not wanting to release Crash since it might promote kids to have sex in cars.

It was a good talk, but nothing special. Cronenberg was clearly on and utterly charming. I just wish I he could have shown me the wonder in this very messy movie.
Posted by Steve Kopian at August 18, 2012