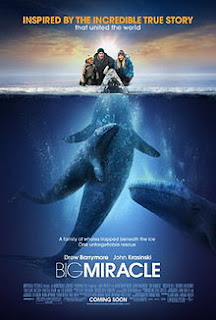 I did not want to see this film. I was sure it was going to be your stereotypical feel good film that's based on a true incident. I figured it was going to suck. Then I ended up with a DVD and I wanted to clear my head from the NYAFF so I popped it in...

...you know what? it's your stereotypical feel good film based on a true incident. The surprising part is it doesn't suck.

The story in the film is that a reporter doing a human interest story on tacos in a small restaurant in the wilds of Alaska. While in the town he shoots some of the locals goofing around on a snowmobile. In the distance he films plumes of mist coming from the ice. It transpires that that there are three whales strapped in the ice and their only means of breathing is a rapidly freezing ice hole. He files a story and it goes around the world bringing help from all over, including his environmentalist ex-girlfriend played by Drew Barrymore.

If you can't fill in the gaps you really need to see this because you clearly haven't seen enough cliche filled films.

If you can fill in the gaps you should see this film because despite being full of cliches and forced feel good moments the film is actually entertaining.

Yea I know I should probably have my head examined but at the same time some times its nice to see that Hollywood can occasionally turn out something like this.  I mean usually they do cliche feel good really badly. I mean honestly don't you normally want to throw up when you see a film like this?

Why does the film work? I'm guessing the cast which has Barrymore, Ted Danson, Kathy Baker and several other character actor stalwarts lifting the film up by their very presence. I think it also helps that while the story is more or less structured cliche the script creates good characters and has some good dialog.

For what ever reason this is simply a small scale film that shouldn't work but does.... worth a look if not on DVD when it goes into eternal rotation on cable TV.
Posted by Steve Kopian at August 24, 2012