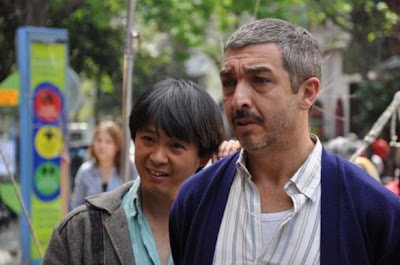 Without a doubt one of my favorite films of the year and containing probably the best opening of any film I've seen,Chinese Takeaway is a HUGE joy of a film.

The film concerns a grumpy man, Roberto, who lives alone, running the hardware store that once was run by his dad. He is scrupulously honest to the point that he counts the number of screws in each box and complains to his distributorsif they aren't as advertised on the outside of the box.

He is also the object of desire by a woman, Mari, who lives in the country and is the sister-in-law of a friend of his. She completely understands him (and why he won't respond to her affection) but loves him anyway.

Into his neatly ordered life come Jun, a Chinese immigrant who is dumped on the side of the road after being robbed by a taxi driver. Roberto takes pity on him and tries to drive him to his uncle's home. Complications occur and Jun and Roberto end up stuck with each other with no way communicate except gestures.

Forget what you think happens you're probably wrong (other than they do become friends). This is one of those wonderful times at the movies where I thought was going to be getting one thing and ended up with something else. Even better when I thought the film was going to go in one direction it ended up in a completely direction. And better still a couple of the turns are better than I could have expected (ie. the wall).

While the relationship between the two men is the main focus, we also have the plot line of Roberto being perused by Mari. She knows him to the core of his being and in a late in the game speech tells him who he is, why she loves him and ends it with "But I love you anyway." before walking off . Call it one of the great romantic declarations on film and it melted my hard heart.

When the press screening ended I wanted them to rerun it. I needed to see it again. I needed to go back to that most unexpected place.