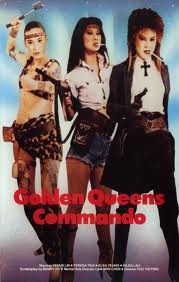 This film is not high art. This film was never intended to be high art. Its a popcorn movie and as such its scores at the top of the charts.

The plot of this gem has a bunch of women with various criminal skills thrown into prison during World War 2. They escape and proceed to head off to destroy a chemical lab in a well fortified valley.

What begins as a crime film, slips into a women behind bars film, then to a prison escape film, then a World War 2 secret mission film, onward into a western; there are ghosts, a James Bond spoof and everything you can think of except a musical number. This film almost (literally) has it all. And its all just serious enough to be interesting and silly enough to be enjoyable.

And whats a great film without some mind bending moments: the Japanese (I guess) villains all wear Nazi SS uniforms; the women all sport sunglasses and hair styles from the early 1980's, the prison guard tower spotlights are theatrical spotlights, the English dub has one of the girls a Southern belle and several of the men as dundering idiots. There's more, but I'll leave you to find it out.

This is the perfect film for those nights when you're not sure what type of movie you want to see because this is alltypes of movies at once. Its a low brow action film thats just meant to entertain, and thats what it does.

If you like exploitation style action films this is an absolute must see.10 out of 10.

(A "sequel" is Pink Force Commandos which is tomorrows movie)
Posted by Steve Kopian at August 25, 2012