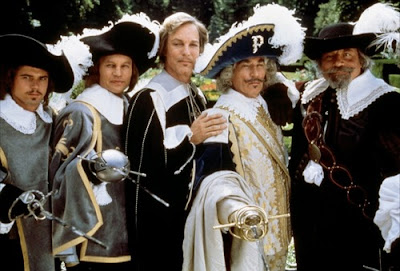 C Thomas Howell joins, Michael York, Oliver Reed, Frank Finley and Richard Chamberlain in what turned out to be Roy Kinnear's final film (he was thrown from a horse), another go round with the Four Musketeers. In many ways it's old home week as several actors from the 1974 films return for more swashbuckling mayhem.

The plot has the musketeers dispatched to rescue King Charles from the clutches of Oliver Cromwell by the Queen of France (a returning Geraldine Chaplin). They are hampered by an evil Kim Catrell and her father Christopher Lee (returning somehow from the earlier films despite being killed off)

High art doesn't enter into it... or low art for that matter. This is simply Richard Lester getting the band back together for another go round. I'm sure in theory it sounded good but in execution it didn't really work with Richard Chamberlain in it only fleetingly and Kinnear's death putting a cloud over everything. Kinnear was supposed to be in this more but he died early on with the result his character mostly disappears or appears only from behind.

When I first saw this film in the 1990's I was disappointed. It was a weak sequel to two classic films. I kind of liked it in a its better than nothing way. Then back around 4th of the July I saw it again. Stripped of any pretense I simply watched it and while it would never win an award, it was a blast in a mindless sort of way. Its a bunch of old guys revisiting past glories and having a good time. They have a good time and I had I good time.

No, it's not the equal of the previous films nor should it be watched in close succession to them, but divorced of the earlier films this film is great way to spend a rainy Sunday afternoon.
Posted by Steve Kopian at August 21, 2012