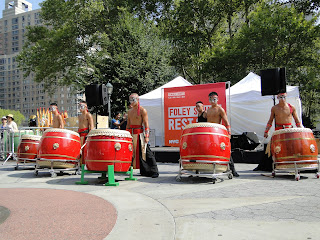 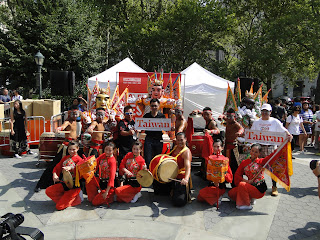 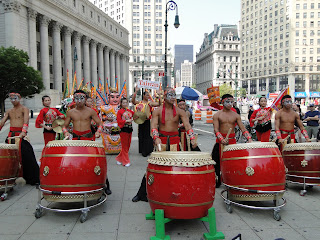 We are not quite ready to let go of that New York Asian Film Festival train just yet as I have at least one more sugar sweet Taiwanese treat to share with the Unseen Films family.  DB & I went to the screening of DIN TAO: LEADER OF THE PARADE last July which was part of the NYAFF programming. DB gave a nice overall capsule review of that particular day’s festivities HERE. In a nutshell, this Taiwanese film was basically a feel good story about a traditional drum team and their struggles to maintain an identity, remain relevant, & to come together as a unit to compete with a rival troupe.  I liked the movie a lot but I LOVED the cultural and drumming aspects of DIN TAO even more so. 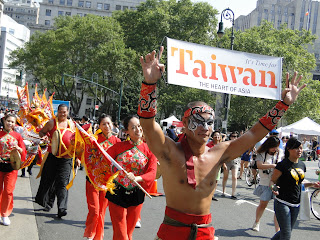 As luck would have it, the drum team that the film would set the spotlight on, The CHIO-TIAN FOLK DRUMS AND ARTS GROUP happened to be coming to NYC for a debut performance at Hearst Plaza on the grounds of Lincoln Center last friday. Unfortunately, I couldn’t make their show on-time but luckily I found out that they had one more performance slated at Foley Square by City Hall the next morning at 10am before flying back to Taiwan.  Seeing and hearing the CHIO-TIAN group in person made me appreciate Din Tao even more. The drummers looked fierce and ready for battle as they pounded rhythmic tribal beats on the drum wearing their ferocious face paint with traditional bottoms and no tops while the ladies looked elegant dressed in their custom embroidered folk uniform.

Din Tao is a religious Taoist procession which features drumming, huge body costumes of gods and an even bigger & taller body costumes of the Eight Generals who serve as “policeman” to capture and punish evil spirits. 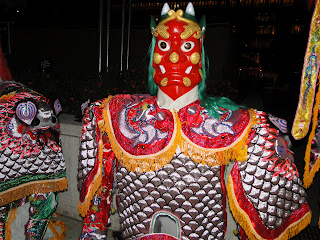 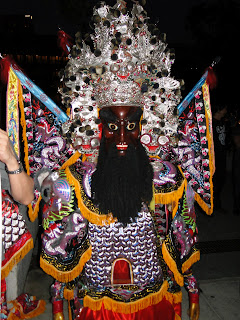 I recognized at least one of the drummers at the performance in Foley Square who was in the movie as well. I hope you enjoy the ritualistic Taiwanese drumming and dance routines! 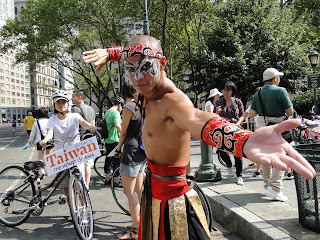 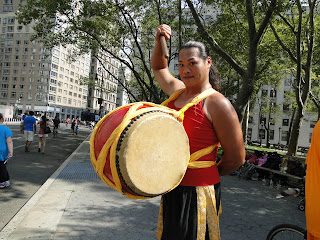