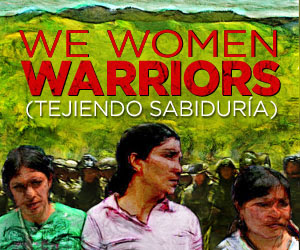 When you suffer you feel the suffering of others

Hopeful documentary about three women in different parts of Columbia who have taken a stand against the violence happening around them and have taken steps to stop it.

There is Doris, a shopkeeper who organizes the people in her village to get things done. She is very out spoken about the situation in her village. When she spoke out at a UN sponsored conference she had to stay away from her village for a while because she found out she was on a hit list of one of the roving paramilitary groups.

Flor is the Tribal Governor. She got interested in politics because she wanted to find out what happened to her father and grandfather who were killed due to conflicts with native land reclamation

And there is Ludis who's husband was killed by the rebels and who took a job with the police as a cook. This didn't stop the military from seizing her and throwing her in jail as a rebel for a year.(Neither she nor anyone taken with her was a rebel.). She now holds meetings where the women left behind by the violence weave and talk about how to stop the violence.

This is a wonderful documentary. This is a film that shows very clearly that people can make a difference and that change can be forced to happen.

The film scores many many points for laying out the conflict simply, from how the rebellion started when the political infighting in the 60's turned violent. There was then the rise of the paramilitary groups, allied with the regular military who were paid by the elites who wanted their stuff protected. Additionally you have the drug trade which funnels money into all sides. The Native population is caught in the middle as every side fights with every other.

Five million people have been displaced with in Columbia simply because they want to get out of the ever shifting war zones. No one is certain where to turn.

If that wasn't bad enough we also see the trouble with the war on drugs as the farmers worry about whether the government will spray defoliant on their fields since it will poison their water. Yes they grow cocoa leaves for the drug trade but the government makes it so its the only option since the roads are so bad they can't carry fruit to market, and even if they did they would get pennies for a large load for their crop instead of dollars for a small bundle. There are no simple solutions.

However the women in this film are looking for non-violent solutions. They are trying to bring everyone together to stop the violence. We see some of their successes in driving the war away. In one of the key sequence Flor arranges to have a police barracks forcibly dismantled because ever since the police arrived to protect the population the once peace full town was turned into a battle zone. Using authority given her and her fellow leaders they evict the police and destroy the fortifications.

I need to point out that rarely has Columbia looked like a real inviting place. Certainly it doesn't look like the den of drug dealers most American media would have you believe it is.

I really like this film. It was a real pleasant surprise. Here we have a film about bad situation that is filled with hope and possibility instead of the doom. I like that the film focuses not on the bad things that are happening but on the good people trying to stop them. I have seen way too many documentaries of this sort that stridently trumpet the evils of the world that get you to mouth "yes this is terrible we must stop it" before you go off and do nothing. We Women Warriors is different, it shows us the hope and makes you really want to be part of the change that they are trying to make.

The film opens Friday at the IFC Center as part of Docs Week.
Posted by Steve Kopian at August 08, 2012