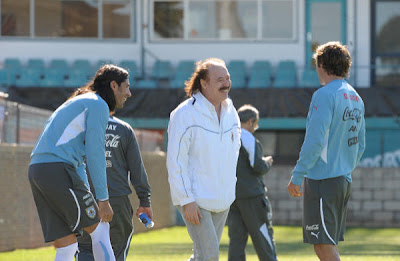 Documentary about the soccer team from Uruguay and their trip to the World Cup in 2010.

It was filmed by a father and son, Jaime and Yamandu Roos, the father a popular singer and his son a filmmaker. Much of the film is a travelogue of the pair as they travel with the team, cover the games and hang out with fans.  The film also follows the improbable course the the soccer team as they get farther and farther into the the tournament.

I'm mixed about the film. The film seems to have been put together in order for the father and son go to the World Cup. I don't think that the pair really expected that the team would do as well as they did and so they didn't plan to do much. The early travel sequences reveal the good time being had by all and paint a lovely portrait of South Africa.  These early scenes showing the camaraderie of the pair  carry the film through the shaky camera work. The sequences also compensate for the some god awful narration over the first two games the team played. What are they talking about? I have no clue. It seems to be a series of declartive statements rather than informative narration. It's painful. then the games end and we're back with the boys and all is right with the film.

There is a point about half way in when the father and son stuff all but stops and we get simply coverage of the games played in great detail. Its riveting stuff, but at the same time the film ceases to be special (about the father and son) and instead becomes just like every other good sports documentary out there (about the team). Don't get me wrong it's not bad, it's just not special, certainly not special enough to warrant an almost two and a half hour running time.

For sports film fans or soccer fans it's definitely worth seeing on the big screen, for everyone else this is a should see on TV or DVD.

This is the closing film of Latin Beats and plays August 21 and 23
Posted by Steve Kopian at August 09, 2012