Sunday Nightcap- Where are the godless films? 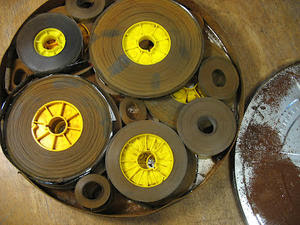 Where are the great atheistic films?

How about any good ones?

Okay... where are the even okay films that, as part of the plot, view the world without god or spiritual matters?

I can't find one.

I was planning Unseen Films course for the next bunch of months and I came to the conclusion that there are no great films that are devoid of god. Yes there are films that don’t even broach the subject, or have no notions of a creator or a god as part of the story, but there are no films that I’ve run across that operate with any sort of atheism, where god or the supernatural or spiritual notions don't exist and never existed. (This is different than saying god is absent, uncaring or dead since that would imply a supernaturally constructed universe which I'm trying to avoid all together)

As I said the question came up when I was planning the films for what turned out to be the next six months. I was putting weeks together and thought that I’ve done films about Jesus, the path to enlightenment and other spiritual subjects, but I’ve not done any films that took the opposite view. I figured it was time to go in the other direction so I put on my thinking cap and I tried to come up with a few titles.

I couldn’t come up with one.

I could come up with films about the disinterest or silence of god, but I couldn’t come up with a single narrative film where the lack of god/spirit/karma/destiny was part of the plot. I could come up with a few documentaries that explain atheism and that point of view  but to be honest they are a dull lot and any I've seen end up boring polemics which leave me feeling “You’ve made your point…and what am I supposed to do with this?” after ten minutes.

At this point I should probably say that I’m an agnostic. I can see the absolute validity of both positions of deists and atheists, but at the same time I have problems with both positions…

…but the point of this piece is not to argue for or against any position (even the middle one), only to ponder why there are no (good) films from the atheist point of view. You either have some spiritual mention or none at all (which makes them not suitable for this discussion).

I suspect that the problem is that if you deal with the notion there not being a god or something spiritual or fate you limit yourself. Where do you go with it? What do you do with the plot? How do you have things play out in a story? Say if lovers aren't fated to meet what's the point? If a good man does something bad and doesn't get a karmic comeuppance whats the point? That's not a story   most people are going to want to read/see since that's real life. People don't want real life, or so much real life.

You also run into the problems in that the stories we tell kids tend to be what we want them to aspire to and not they way the world is. You probably shouldn't teach them not to do bad things by telling them that in the real would you may never get caught or that nothing will ever happen to you.

As I said you can make a film that doesn’t have a spiritual aspect at all by never referencing it. But it's difficult You can have one that does. But on a certain level you can’t really do anything with a film that has a lack of spirituality/god as a component. How would you even work that into a plot line? The notion of God and spiritualism is always used to show something greater, there is something more, some higher power, something we are striving for beyond the here and now. I think if you remove that you kind of shrink the box and limit yourself. I’m not saying that’s right but without a god/supernatural you remove fate, destiny, karma and so many other twists and turns that creators use to tell their story. You frequently need some sort of higher power just to tell a story.

In a twisted sort of way the best atheistic take on story telling might be Michael O'Donoghue’s legendary piece on how to tell a good story . He argues in it that all stories should end with the main character getting hit by a truck because life is like that.

I think the closest we’ve come to that is Contact with Jody Foster. Aliens contact us and tell us kind of some of the secrets of the universe. The problem is that things get mucked up with the alien appearing as her father.

The only other film on the subject would be to take Chariots of the Gods to its logical conclusion- the aliens come down and explain that there was so divine intervention it was all them. They say flat out that there is no god and any feelings beyond that are mistakes and misfiring brain chemistry.

Outside of that I'm stumped. I really can't think of a narrative film that is atheistic in the telling. If any of you know of any movies let me know I’d like to take a look.(though I'd prefer good films)

As for documentaries, I’m going to politely take a pass. While I have a desire to see a really good one, I won’t review it here since the odds are any review would have to entail a detailed discussion of the pros cons and uncertainties of all the positions and I don’t want to get into any arguments...I've lost too many friends as a result.

ADDENDUM
In doing a revision of this piece I suddenly thought of  Woody Allen's Crimes and Misdemeanors. Which has good people getting the short end of the stick and bad guys getting away with it. The trouble is I haven't seen the film in a long time (I don't particularly care for it). For me the uncertainty of including it is whether there is any discussion of god and the random nature of existence in it. and because the film is very much set up to be the bad guys always seem to win.

The trouble for me with the bad guys always win is that any films like it seem to be taking an almost anti spiritual bend to them in that the universe is cold and cruel and will screw you over all the time, which isn't really the case. Yes the universe is dog eat dog, but at the same time you must remember that any morality of it being a bad place is just as questionable moral construct as saying it's all flowers and sunshine. To me there should be a neutral nature to it all.
Posted by Steve Kopian at August 26, 2012