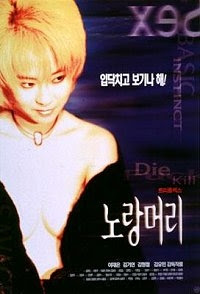 Yellow Hair
The plot is simple two girls, one with yellow hair and one with orange hair pick up a guy in a club and they end up involved with him. When its revealed that he has a girlfriend he wants to return to things get ugly.

I'm of mixed feelings about this movie. Its a beautiful movie with sexy women, a tense story and a great artistic and music sense (I love the club scenes). The problem is that somehow it never comes together enough to be as good as the combination of its parts.Don't get me wrong its good, especially if you like sexy thrillers. I'm just annoyed that in some ways it simply refuses to be more than just an exploitive thriller instead of rising to something else, which it seems capable of doing since it has all of the material there. This isn't a bad thing, since the film as it stands now is a very good thriller, but some how I thought it could be and should be more, though I don't know what it would have taken to make it cross the line into greatness.

Reservations aside, I think this is worth a shot especially if you like sexy thrillers. Certainly its infinitely better than most of the American and Euro crap that shows up late on Friday and Saturday nights on stations like Cinemax on their "adult" movie blocks.


Yellow Hair 2
More Drama than thriller, this sequel in name only is better than the first and should be allowed to stand on its own

First off this film has no connection to the first Yellow Hair film. Secondly the sometimes quoted subtitle of "Pornography in Blue" is actually a title of one of the sections. Lastly this is less thriller or exploitation film than a drama about three people coming together in the event of one moment and going on from there.

This film surprised me. Watching this late at night after seeing the first Yellowhair I was was shocked that it was as different as night and day. This is a film that has something more on its mind. The film is structured in titled parts. The first three introduce us to our three main characters and take us to the same point in time. Once the film has brought all three characters to that moment it then moves on from there as they try to put their past behind them and create a future for themselves, only to find that bits of the past are always attached.

I really liked this film a great deal. Different by almost any standards this film tries and mostly succeeds in telling us a story of three people who are unable to get away from the past and fully start a new life. Its not preachy or exploitive, it just is. Even Ha Ri-Su, the transsexual model, who plays Jae, and on who's life this is supposed to be partly based, isn't used as anything more than a character that fits with in the frame work of the story.

(Though I will admit that a good deal of my enjoyment came simply from seeing something different and not from clear superiority in film making)
Posted by Steve Kopian at August 07, 2012