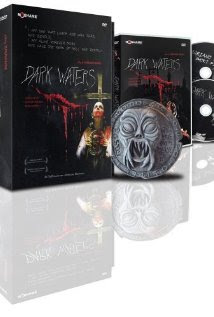 (This is my review for one of my favorite horror films. Up until recently no one really knew what it was. It played last year at Scary Movies at Lincoln Center with the director in attendance, which I couldn't go to. This was a blog entry I made after I first saw the film)

I should be asleep...

But I have to get this down.

I stumbled upon this film completely by accident. I had ordered the Japanese film Dark Water and was sent this instead. The retailer told me to keep the film in order to make up for their error. It was a weird thing to have happen, and I figured it must be some cosmic sign, so I sat down to watch it having zero idea what it was about.

The plot of this film has a young woman going to a desolate monastery/nunnery in order to find out why her recently deceased father had been supporting it for years. Once there things are far from "normal" and there are many hidden dark secrets, not all of them are particularly healthy for our heroine.

This film really knocked my socks off. This is a movie that reminded me of many of the Euro-horrors of the 1970's and early 1980's. You have weird cults, young women, murder, mayhem and monsters. There is a weird tension that comes from everything being ever so slightly off center. You can't help but feel uneasy since you don't know how weird things are going to get nor do you know who is going to end up dead.

(SPOILER AHEAD) The only real problem is that even though the movie creates a very real claustrophobic world of religious oppression, with real characters, the film completely falls down in the last minutes when we see the "demon" that has been lurking around, at that point things go right into the toilet. How do I say this? Its worse than a man in a suit. it simply a rubber nightmare that almost completely ruins everything that has gone before. Simply put its on the list of really bad monster costumes. (Think about what happened at the end of the Conan the Destroyer)

If you can get past the bad monster and just take the movie for what its trying to do, then you'll enjoy the movie, if you need a perfection you'll love it up to a point and hate the ending.