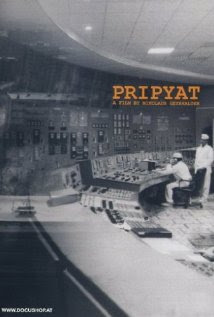 Pripyat is the town near Chernobyl. It is the name of the river that flows along side the plant. It is also the name of a documentary about life inside the town and the Zone around the plant.

After the Chernobyl accident the town that was built up around the plant was hastily evacuated. People were loaded on to buses and sent out of dodge. As the crisis was dealt with a 16km exclusionary zone on every side of the plant was set up. No one and nothing was to go in and out of the area unless they were monitored and controlled. Eventually, after as much of the radioactive debris was cleared up, and the damaged reactor was entombed, Soviet officials realized that they needed the power the undamaged reactors could supply so they set up a method by which people would be able to go into the exclusionary zone to run the reactor, monitor the damage and keep out intruders.

Pripyat is the story of life in the exclusionary zone.

Shot in stark black and white with a style that seems akin to a Bela Tarr film, this is a haunting portrait of people who choose to live and work in a place of incredible invisible danger. It seems like what it is, a post apocalyptic world where life some how goes on. Its surreal since in our head we know there is danger, but to our eyes everything looks perfectly normal, if, in some places a tad overgrown.

Why would anyone choose to subject themselves to the danger? For some it’s the money. For others it’s a chance to remain connected to the place they always considered their home. For one couple it is their home, having moved back into the Zone despite being warned of the danger. When we first meet them they tell us they have been their for 12 years. When they moved back they had been warned by experts that they would be dead with in 7.

I am haunted by this film.

I am haunted by the notion of living and working with in a world that seems perfectly fine, but in reality is full of invisible death. While the people living and working near Chernobyl know the risks of what we are doing I’m left to ponder how many of us are doing something similar but are unaware of it thanks to the dangers of modern life such as pollution.

There is much to ponder in the film.

Definitely worth tracking down
Posted by Steve Kopian at August 22, 2012