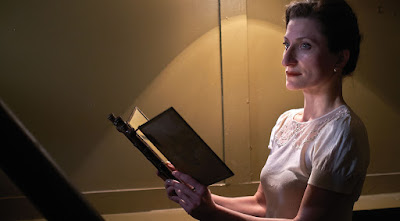 A woman is given a magical gift which could change her life.

Sweet little film is a lovely beginning to something greater. Whether it as intended to be or not ASCENT feels like pilot to a series or a the proof of concept for a longer film. That's not a bad thing, but more the easiest way to explain the film which goes through a lot of effort to explain what the woman has been given only to stop just as it was getting good.

Now I know many of you are going to ask if that makes the film bad,. The answer is no. While similar films  tend to lose the audience when they stop essentially at a cliffhanger, ASCENT manages to skip this by ending at a natural break. While I would love to know were this goes next, I could leave it here and not be too upset. Hell,  I was finishing the story in my head for a good while after I finished the film.

Director Mark Brocking has made a wonderful little gem of a film. While I would like to see more of this story, frankly he's made such a neat little film that I want to see what he does next.

For tickets or more information on Sunday's screening go here.
Posted by Steve Kopian at June 09, 2018