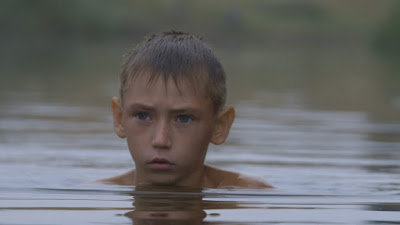 This is a portrait of  Oleg, who lives in the Donetsk region of eastern Ukraine. This means he isn't far from where the Russian backed troops are fighting the Ukrainian forces for control of the country.  Not only is his world filled with the sound of dogs but also gun fire and explosions in the distance. At night he can see the rockets and fire in the distance. Still he is a kid and along with his best friend he putters through this day, going to school and getting into trouble-- which in this case could be deadly.

I am in awe of this film. A beautiful shot look at childhood and not so distant war this is a film where the images burn into your brain. Beginning with dash cam footage of a mortar attack we are instantly thrown into the war. The film then cuts to the country where we meet Oleg and the war. The juxtaposition allows the war to remain distant but still always present. It colors everything we see.

Controlling all out emotions is young Oleg. This quiet young boy is the sort of fellow that we all can identify with. He is wonderfully still a kid, though one that has to wrestle with what the war really means. The incident with the gun makes it clear he doesn't fully understand the danger. He possess one of the greatest faces ever to be on the screen. Think of him as the real life counterpart to Aleksey Kravchenko in the shattering COME AND SEE or Christian Bale in EMPIRE OF THE SON. If you want to see how right they got their roles, watch Oleg.

This film left me not so much moved but changed. I don't know what or how or why I only know that coming out on the other side of the film I felt different. How I see the world and war shifted. This is a film that not only opened my eyes but altered how I see the world.

And that I think is all one needs to know about the film- it will change something inside you.

THE DISTANT OF BARKING OF DOGS plays the New York leg of the Human Rights Watch Film Festival June 18 and 19. For tickets and more information go here.
Posted by Steve Kopian at June 16, 2018