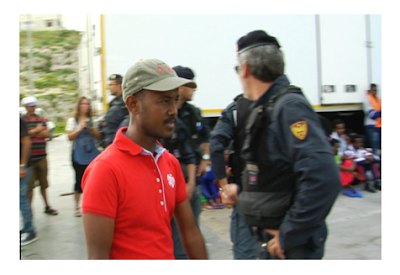 A look at the refugee crisis in the Mediterranean via a survivor of a horrible boating accident that left hundreds dead off the coast of Lampedusa in Italy and a family that fled Syria into Turkey.

How you react to this film will be determined by how many films on the refugee problem you have encountered recently. If you haven't seen many then the film is going to be a punch in the gut and a poke in the eye. Reducing the story down to two affected stories will potentially move you to tears since you will get a sense of just how bad things are.

On the other hand if you are some one who has been taking in a steady diet of films on the subject then this is going to be less effective, not because the film is bad but because you've seen similar stories before. If you've seen films such as FIRE AT SEA, SKY AND GROUND, SEA SORROW, 4.1 MILES and others, then you know the territory you're operating in.

For me the strongest part of the film is the details of the Lampedusa tragedy. The sheer scale of what happened touched me. I took copious notes,  which aren't going to get used because the rest of the film left me unable to say anything new.

I should point out that this doesn't mean the film is bad, more that there is a good chance you may feel you've been here before.

IT WILL BE CHAOS screens Monday on HBO and again on Wednesday the 20th.
Posted by Steve Kopian at June 16, 2018