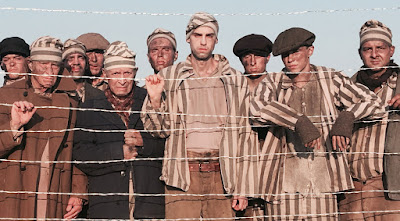 Two part story about a group of soldiers on patrol during the Battle of the Bulge and prisoners making the V2 rockets for Hitler.

Good but much too short film about the prisoners who made the V2 and risked their lives to make sure they didn't work. A good as the subject the film doesn't really work since it isn't really clear what we are seeing until the very end of the film. Why are we watching a group of American soldiers? What exactly are the prisoners doing, and why does it take so long to get there? I wasn't sure until the very end.

To be honest there is a real and important story here that should be told, but trying to cram it into 15 minutes kind of does it a disservice. This is something that needs to be a feature. As a short DIRTY BOMB disappoints. However as a proof of concept it points the way to a potential winning feature.

For tickets and more information go here
Posted by Steve Kopian at June 11, 2018