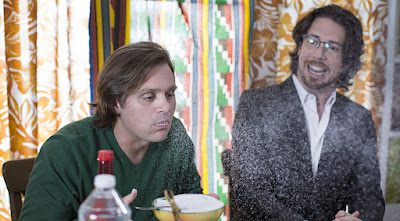 Matt Vladimery is once again starring as Herbie in Ralph Bismargi's follow up to his screamingly funny short film HERBIE from last year's Dances with Films and the result is even more laughs.

The original film had a life coach wanna-be Herbie (Vladimery) in what should be a star making performance) trying to make a video to help people and it all goes wrong. This time director Bismargi has a series of of short episodes where Herbie is once again trying to shoot videos and as expected they all go off the rails. I loved every minute.

The arc of each episode is the same through all the current episodes, Herbie has some advice to impart and then something goes wrong that causes him to react in the exact way his lesson says he shouldn't. In theory the pattern should get tiring but in all the episodes every pay off resulted in laughter. That shouldn't happen  but it only goes to show you just how good director Bismargi and his star Vladimery  are because they make the joke work. (I should point out that while Dances is only showing a couple of the episodes, I saw all nine that have been produced and I laughed at them all.)

While I'm not sure the series can survive ore of this exact pattern, I am really hoping that the series gets to go on and the mad geniuses behind the series get to take Herbie in some other direction.(Addendum: director Bismargi says more episodes are coming- yea!)

A must see at Dances With Films when they play this Saturday.

For tickets and more information go here.
Posted by Steve Kopian at June 06, 2018