Adventures of the Flying Cadets (1943) 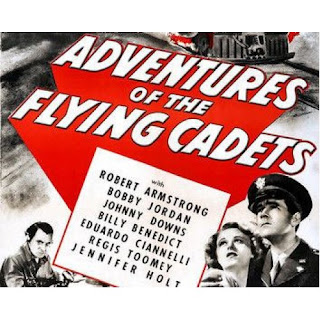 Group of young men at a private flying school are angling toward a career in the army as fliers (Its during WW2). Into the mix comes the Black Hangman a Nazi agent who is killing industrialists and looking for the map to Ankaban a lost city in Africa.

Moving from the airfield to the jungle this is a neat little movie that sucks you in and carries you along. Clearly Universal actually cared about this serial, something not always evident in some of their wartime chapter plays.

To be certain it doesn't stand out as as one of the great serials of all time, it is however compulsively watchable as I found out when I put this on to watch a chapter or two and found myself five or six chapters in with out a thought. I really liked it. Plot wise I'm not sure if its a good thing that we know who the Black Hangman is in the second chapter (or first if you recognize the voice), I would have thought they could have used the masked villain to grater effect, but at the same time it is interesting that his Nazi masters clearly hold him in contempt and are planning on using him to their own ends.One doesn't usually get this many layers of good and bad guys.

Definitely worth a look
Posted by Steve Kopian at June 23, 2018

Email ThisBlogThis!Share to TwitterShare to FacebookShare to Pinterest
Labels: serial