The Catcher Was a Spy opens Friday 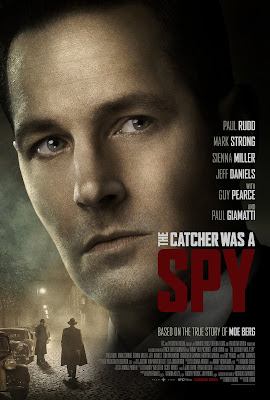 According to Michael Frayn’s play Copenhagen, Werner Heisenberg’s commitment to Germany’s atomic bomb program was an ambiguous uncertainty that bedeviled the great Danish physicist Niels Bohr years after the war ended. An American OSS agent had to make that determination based on a few hours observation and a brief conversation. He was not a physicist, he was a professional baseball player. Nicholas Dawidoff’s bestselling chronicle of Morris “Moe” Berg’s WWII service is now dramatized in Ben Lewin’s The Catcher was a Spy, which screens during this year’s Sundance Film Festival.

Berg was a member of the Boston Red Sox, but please do not hold that against him. He was a dependable but not spectacular journeyman player, who held roster spots on several teams. He spoke several languages, including German and Italian, and regularly read foreign policy journals. As a result, he had the foresight to film Tokyo harbor during a 1934 exhibition tour, well before Pearl Harbor. Once the war started, Berg’s talents and his 16mm film attracted the attention of “Wild Bill” Donovan and the OSS, the CIA’s predecessor agency.

Eager for field work, Berg gets his chance when Donovan orders him to prevent the retreating Germans from abducting or killing Italian scientist Edoardo Amaldi, with the help of Dutch physicist Samuel Goudsmit and Major Robert Furman, the Manhattan Project’s intelligence chief (who would later oversee construction of the Pentagon). However, their Italian mission will lead to a trickier assignment in Zurich. Berg is to meet with Heisenberg, assess the status of the German Atomic program, determine whether Heisenberg is trying to advance or hinder its progress, and if the former proves true, kill him.

Without question, Berg is one of the great, under-heralded figures of World War II history. Arguably, he is the sort of renaissance man you just do not find anymore. He was also a “confirmed bachelor,” which led to plenty of speculation that Robert Rodat’s screenplay continues to stoke. Be that as it may, the film also nicely captures the intriguing milieu of the Donovan-era OSS.

Paul Rudd is does some of his best work bringing out the personal contradictions of the deeply patriotic and borderline-savant-like Berg. He also develops some ambiguously potent chemistry with Sienna Miller in the otherwise under-written role of Berg’s lover, Estella Huni. Catcher is also packed with colorful and convincing supporting turns, including Paul Giamatti as the humanistic Goudsmit, Mark Strong as the evasive Heisenberg, and the great Tom Wilkinson as Paul Scherrer, the Swiss anti-Nazi physicist, who brokered the meeting between Berg and Heisenberg.


It is just tremendously refreshing to see a film that celebrates American intelligence operatives as heroes. It also thinks quite highly of scientists and soldiers. It is a fascinating true story and a well-crafted period production. Very highly recommended for fans of historical intrigue (like Bridge of Spies)
Posted by Steve Kopian at June 18, 2018