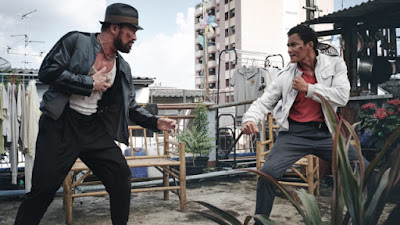 What makes a series a series? In the case of Wilson Yip’s thematic, in-name only martial arts thriller franchise, it is the consistently superior fight choreography. It is known as Sha Po Lang (a Chinese Zodiac reference) in the Asian market, but it goes by SPL or sometimes Kill Zone in the West, but apparently the latest film has dropped the series prefix altogether for the international festival circuit. There are no overlapping characters or story arcs, but Yip returns to the director’s chair after assuming a producing role on Kill Zone 2 (a.k.a. SPL 2: A Time for Consequences). No matter what you call it, the series maintains a well-earned rep for high-octane action with Yip’s Paradox , which screens the Fourth of July during the New York Asian Film Festival.

As a police negotiator, you maybe would not expect Lee Chung-chi to Liam Neeson’s very particular set of skills, but when his daughter Wing-chi disappears in Thailand, all bets are off. Fortunately, one of the few honest coppers in Bangkok is assigned to the case. Lee and Tsui will follow the trail to an organ harvesting ring, but eventually Lee goes rogue after receiving a tip implicating the blatantly corrupt Det. Ban. Tsui’s compromised police chief father-in-law pressures him to relent, because the intended beneficiary of Wing-chi’s abduction is the secretly ailing mayor, but obviously that is not going to happen.

Although there is no narrative continuity, Paradox continues the tradition of bringing back prior cast members in completely different roles. Serious martial arts fans will be happy to know this includes Tony Jaa, now appearing as Tak the devout Buddhist cop, but frustrated to learn it is a “special appearance.” He will not be around for the third act, but he definitely makes his limited screen time count.

Perhaps the biggest surprise is how hardcore Louis Koo (another holdover from 2) gets as Lee. He has made plenty of cop and gangster movies before, but often the more demanding work has been assigned to a partner, like Nick Cheung in Line Walker. He earns mucho credit for really upping his game for Paradox.

Likewise, Yue Wu hangs with both of them, going toe-to-toe with the flamboyantly villainous Chris Collins as the organ harvesting ring-leader. Gordon Lam effectively counterbalances him as the icily ruthless political fixer, Cheng Hon-sau. Unfortunately, Vithaya Pansringarm is under-employed as the problematic Commish (he is not really evil, just weak), but Ken Lo takes sleazy repulsiveness to a new level as Ban. This is definitely a testosterone kind of film, but Jacky Cai manages to make a strong impression as Siu-man, the prostitute who informs on Ban.

Even though Master Sammo Hung never appears in Paradox, he still counts as one of the stars, thanks to his bone-crushing action direction. This isn’t pretty Crouching Tiger aerial work. It is hard knees and elbows, in the Muay Thai tradition. Frankly, the combination of the tough but hugely cinematic fight scenes with the all-star cast firing on all cylinders is tough to beat. Highly recommended for action fans, Paradox screens July 4, as part of this year’s New York Asian Film Festival.

For tickets and more information go here
Posted by Steve Kopian at June 30, 2018