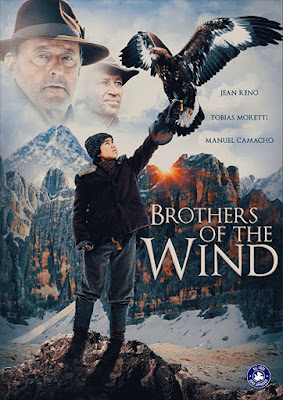 BROTHERS OF THE WIND is a nice little family film about growing and learning to let go. The film is set in the wilderness of Europe. A boy named Lukas is mourning the death of his mother and retreating from the world. His father is uncertain how to connect. When Lukas finds an eagle chick he begins to raise it with the help of Danzer (Jean Reno) a hunter who acts as a watchman for the forest.

Beautiful scenery mixes with some striking shots of the eagles being eagles make this a visually impressive film. I have not seen nature photography this gorgeous outside of some of the top shelf documentaries that the BBC and Disney have been producing. That shots as amazing like these would be in a documentary makes sense because you shoot and then assemble, but the thought that we have such amazing images and they tell a fictional story is truly amazing. I desperately want to sit down with the director and have him tell me how the film was shot and assembled.

This is a solid little film. This is the sort of film they really don’t make any more. It’s the sort of “true life” wilderness adventure that used to play frequently in the 1970’s (VANISHING WILDERNESS anyone?). It is exactly the sort of film that I ate up when I was a little kid and which I ate up in my current position as an big kid in adult’s clothing.

If this is playing near you then grab the kids and go see this gem of a film on a big screen (this is an absolute must big). If not pop some popcorn and curl up on the couch with it

BROTHERS OF THE WIND hits theaters and VOD on June 19th
Posted by Steve Kopian at June 15, 2018