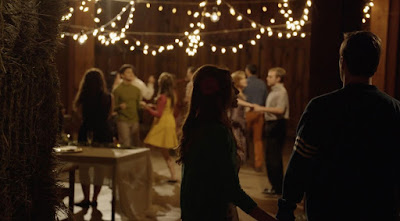 Rich Wolgemuth has made a film I can't really discuss until you've seen it. Structured like a supernatural thriller it is actually something else instead. It  is best described as one of those films that is one thing the first time you see it and something else every time after that. It's power is in that first time viewing and the ending that rattles you.

The easiest way to describe the plot is to recite the way it is described on the Dances With Films website: A man’s journey to save the woman he loves from a pair of mysterious kidnappers leads to a personal revelation that changes the lives of everyone involved. To say any more would be taking the killer edge off the film.

I'm sorry for being intentionally coy about the this great little film but the promotional material revealed too much, not in it's plot line but in how the film came about. Knowing the backstory of the film altered how I saw the film. I kind of knew what was going on before I should have. As a result how I saw the film the first time through was decidedly different than what it would have been had I not suspected the turn.

Talk of the structure aside this is a great little film. Turn or no, it is a solid piece of filmmaking that gets under you skin and borrows into your brain. It's a story that is very haunting and very difficult to shake. I loved this film because it made me think about life in a certain way for the first time.

And unfortunately I dare not say more until you get a chance to see it.

Highly recommend at Dances With Films or where ever you can see this marvelous piece of filmmaking.

For tickets and more information go here.
Posted by Steve Kopian at June 09, 2018