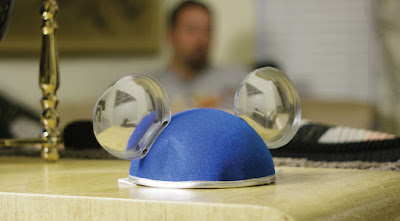 PARDON OUR PIXIE DUST may very well be one of the most important documentaries of 2018.

I don't say that lightly. I know that is a big pronouncement for a 12 minute film but considering that Disney basically owns the planet, the fact that some one is quietly pointing out just how rich the shareholders are getting on the back of the public and their employees is something that people across the globe need to see and hear before they chuck hundreds or thousands of dollars of their hard earned cash at Mickey and company.

The film is a discussion with various people who love Disney but who are trying to make them pay their fair share to Anaheim to whom they pay no tax but from whom they leach services; and to their employees who are paid essentially minimum wage which results in a too large portion of the work staff being homeless. It's a heartbreaking tale that will make you think twice about going to Disney.

Praise be to director Matthew Serrano who has made a film that lays out corporate greed on a massive scale. Everyone jokes about the big corporations but Serrano actually explaining what they are doing to one city-driving it into hock for no return- they pay no tax. He lays out how it happened (Disney bought the politicians) and he explains what it means (they are having trouble paying for basic services)

I've never been to any Disney park but after seeing the games they play, I don't want to go. I say this because all kidding aside Serrano has fashioned a film that makes me question where my money is going and why Disney is charging so damn much and paying out so little.

The most amazing thing about the film is it actually isn't mean spirited.  This is a film where everyone who is interviewed expresses great love for the product but hates the evil overlords. The film opens with an interview with an architect who decided to keep the company at arms length and not work for them when he found out the working conditions.  Everyone wants things to change so that employees don't end up dead in their car or living in the attractions.

When the film was done I was shaking my head. I knew that this was a story that had to get out. It was also a film that needs to be expanded into a feature. There are more stories here, and even the one's here could be fleshed out in more detail. We, as consumers, need  to know what is going on. (I will hold out hope of a feature but I suspect that Disney would try to stop any expanded version, which means it's all the more important.)

Not only is this a must see, it is a must share. This is a film you are going to want to press into the hands of your friends who are Disney fans. While I doubt it will make them stop loving Disney, hopefully it will give them pause. If enough people pause perhaps Disney will pay some tax and a living wage.

One of the best films at Dances With Films and highly recommended. For more information and tickets for the film's screening Monday the 11th go here.
Posted by Steve Kopian at June 08, 2018