Psychonautics: A Comic’s Exploration Of Psychedelics (2018) Dances With Films 2018 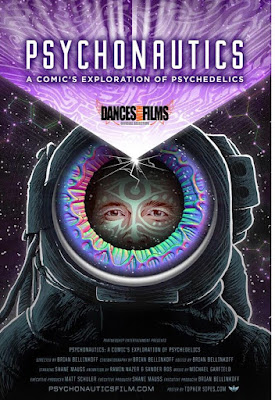 Director Brian Bellinkoff charts comedian Shane Mauss’ experiment to try every psychedelic drug currently known. We watch Mauss trip while we listen to discussion with Mauss, his friends and experts about the uses of the drugs.

At its most basic level Psychonautics is a really good film. It is a great explanation of the drugs, what you experience while on them as well, and the positive side of their use. It’s a beautifully crafted film that lays out what we need to know without the sturm and drang of the anti-drug advocates. This is a film that is the very sort of “shaman” that people who wish to indulge should have contact with because it gives us information we may need to know.

On the other hand the film has some bumps that take the shine off the whole affair.

The first problem is Mauss himself. How you react to him will determine how you react to the film. A low key sort of guy you have to either go with his dry sense of humor or it can be a tough ride. I really didn’t click with him and as such as I was not quite invested in his journey as I should have been. He is also clearly on a great deal of the time so there really isn’t as sense of Mauss as person beyond the one on for the cameras.

The same goes with the Greek Chorus of his friends who fill in details and add color commentary to Mauss’ experiences. Because they know him and were with him during some of his trips we get to hear about things from an objective standpoint but somewhere along the way there is too much with them. For a film that is trying to bridge the gap between anecdotal and scientific the friends keep things weighted toward the anecdotal.

The other problem, or the elephant in the room, is the fact that as the film begins Mauss is just coming out of the psyche ward after a psychotic break as the result of the drugs. While the film deals with the break, the film begins with it and is discussed at the end, the fact that it happened at all leaves an odd taste in one’s mouth.(more so when someone states that it probably would not have happened if he wasn’t taking drugs)

Despite all my reservations I do like the film a great deal. I want to see it again, which lately isn’t something I can say about most films, even one’s I like.

The film plays tonight at Dances With Films and is recommended for those interested in the subject
Posted by Steve Kopian at June 15, 2018

Email ThisBlogThis!Share to TwitterShare to FacebookShare to Pinterest
Labels: dances with films 2018, documentary