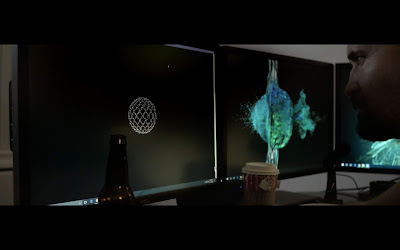 The tour de force performance of Travis Mitchell is what makes PARTITIONED HEART a must see.

The film is the story of a man who is using a program to contact his recently deceased son. However after several days talking the son makes a request

Not explaining a great deal, acting largely as a moment in time. PARTITIONED HEART is a film that sucks you in and carries you along to it's conclusion. We are hooked and care entirely because actor Travis Mitchell sells  the story and the emotion. Mitchell makes us feel everything he is and we are better for it.

Its really isn't wrong to say that Mitchell is the reason the film works because the script is a bit odd. This isn't to say it's bad, more to say that the film has the feeling that it was cut from something longer. I am of this opinion for two reasons, first there is an odd scene that doesn't seem to connected to the rest and bodes of something larger. Second so little is explained that we really don't have any real idea what happened to the son or what the program is. we are coming in at the end of something. The coming in at the end part is actually fine since this allows the film to stand on its own.

I really like the film a great deal. I think it's a super little film on it's own terms. While I don't know if the film will survive an expansion to a feature (again there is one scene that makes me think that maybe the intention),do think what is here is a choice thanks to Mitchell's performance.
Posted by Steve Kopian at June 08, 2018