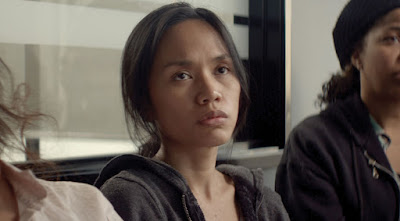 Heartfelt bludgeon to the head short about the plight of an immigrant who comes to the US and is abused.

Insisting on making a statement about the state of immigrant life in Trump's America (a long piece of Trump speaking is included), DIWA ends up being a much too strident polemic about how bad things are. The film wants to show how wrong Trump is and that the monsters are us. This is not to say that what we see isn't what many people experience, from sexual assault to bureaucratic indifference and hostility, to bad jobs and on and on. Rather it's to say that because of a need to make a point in a small amount of time and some bad acting (the cops are terrible) the film ends up being a shrieking alarm clock we smash our hand down to turn off rather than a wake up call that gets us up and into action. Reservations aside, if this was ever turned into a feature, where the story wasn't rushed and the characters could breath then I think all my reservations would be swept aside.

Worth a look for the curious, but I'm not sure how many hearts and minds it will change

For ticket and more information on the Dances With Films screening go here.
Posted by Steve Kopian at June 09, 2018