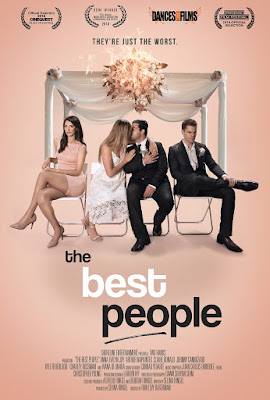 Anna is living with her younger sister after a recent breakdown following the death of her mom. She is doing okay living on the couch however after her sister announces she is going to get married she goes into a tizzy. Teaming up with Art, the Best Man the pair hopes to break the happy couple up because they are certain it will only end in tears.

Buoyed by some really good performances THE BEST PEOPLE is a film that over comes a few bumps to win your heart.

To be honest I was shocked by how much I liked this film. I say that because the opening monologue where Anna babbles to a bartender while funny had the feeling that it was written ore than lived. Watching it I had the feeling that this was going to be one of those inde films that is much more clever than enjoyable. It was a feeling that was kind of re-enforced when we bounced through the calendar as the happy couple got to being engaged. It was all good stuff but the humor was by the numbers. However once the cuteness was pushed aside and the film allowed for some coloring, and some very serious talk, THE BEST PEOPLE sprung to life.

For e the best part of the film isn't the humor but the drama. The talk about trying to fix our problems, or feeling lost and having to save ourselves kicked serious ass. Anna's discussion with her dad about her mom's problems resonated with me big time. The sequence in the AA meeting where she unspools after that was also deeply moving. Frankly the serious side of the film is so damn good that I really wish they hadn't gone for laughs.

THE BEST PEOPLE closes out this year's Dances With Films Sunday night. For more details and ticks go here
Posted by Steve Kopian at June 14, 2018