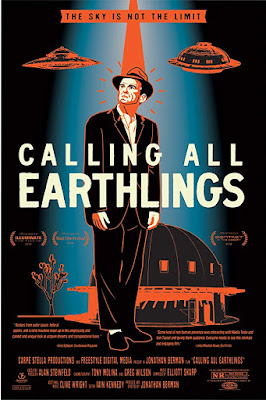 I don't know whether I'm the right person to review CALLING ALL EARTHLINGS or the wrong one. I say that because I'm not sure if  my decades of reading on UFOs and related subjects helped or hurt my reaction to the film.

CALLING ALL EARTHLINGS is the story of George Van Tassel a man who was one of the first known "alien contactees".Supposedly Van Tassel met an alien in the desert who told him how to build the domed The Integratron, which was a weird electromagnetic ray/time machine. The film looks at Van Tassel and how what he did got under the skin of the government, who kept an eye on him and took equipment from the Integratron after he died, It also tries to exlain how his teachings spread out and influenced the world at large.

This is a good but unremarkable documentary. Entertaining but not quite as detailed as it could be it is similar to a good many other UFO documentaries. It's a film that will introduce you to an interesting character but be a little too loving in it's tale.

The problem for me was that Van Tassel was always a fringe character at best. It wasn't until I was into UFO's for a while that his name came up. He was mentioned as being one of the people connected to the start of the modern UFO era but there was a point where he kind of crossed a line and ended up in exile or as a footnote. Part of it was that he was New Agey before that was a term and he didn't really fit with the more science oriented people in the field who dominated it until the mid-1980's.

It's this last line that kind of illustrates my problem with the film. Repeatedly through the film we are told that important scientists were in contact with Van Tassel but we really don't have specifics. Who are all these people. My understanding was always that he was pure fringe, this film indicates he was not, but I don't see any evidence to the contrary.

On the other hand this is a documentary on a fringe subject and having seen hundreds of these things so details were never really anything that I expected to see.

Then again I don't really watch these sort of films to be truly informed, rather I watch them to be entertained and hear some great stories that might, possibly, you never know, could be true. As piece of entertainment CALLING ALL EARTHLINGS fits the bill. As anything more than that you'll have to make up you're own mind.

CALLING ALL EARTHINGS opens today (6/29) in Los Angeles where "Sound baths" will precede weekend screenings at the Fine Arts and Pasadena Playhouse! The film will then open August 1 in New York
Posted by Steve Kopian at June 29, 2018