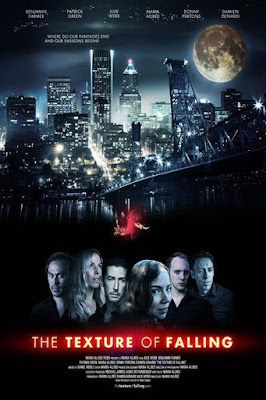 I wasn’t going to write on THE TEXTURE OF FALLING but the film has been haunting me since I was sent it a few weeks ago. I can’t seem to shake it-but not in a good way. Honestly I didn’t like the film either time I watched the film, but circumstance keeps the film popping up back on to my radar despite my wanting to stake the damn thing and bury it.

I was originally made aware of the film when it was sent my way by a PR person who usually sends me excellent films. I have loved many of the films she sends my way so if I she sends me something I’ll automatically say yes. It was with that in mind I original decided to watch TEXTURE. However when I watched the film the first time I really didn’t like it. I wasn’t sure if it was a bad film or if it just wasn’t clicking for me so I decided not to review the film and let the PR person know I was taking a very rare pass on a film.

Time passed and it faded from my memory. I largely let the film fall away. The name stuck with me as something I wasn’t going to review but nothing else.

And then the film started to show up in my Twitter time line. The Cinema Village in New York was tweeting the trailer and as a goof I took a look and was shocked because the film looked really good. I became completely confused because if the film was as good as the trailer I would had to have written it up. And then I ran across another mention or two and I began to wonder why, exactly, I didn’t review it. Was this because it didn’t click? Was it like a couple of recent films simply not having anything to say about the film? Or was it because it was a bad film and I just didn’t know. So I went back to see if I still had access to the film, and finding I did and decided to take a second look.

My mistake, it’s a bad film.

The film is essentially the story of two married men who take up with single women and crash around their romances deciding how to proceed.

It’s full of stilted dialog, arty slow motion, weak performances and tons of clichés. The promotional material and trailer make it seem like there is a mysterious or thriller element to it all but none of it is there. Yes there is a hint of B&D in the relationship between Benjamin Farmer and writer director Maria Allred but that seems to be there simply to titillate and no give insight into anyone. I was bored early on but hung on the second time largely to see if it got better the second time through. It didn’t. Even the ultimate denouncement didn’t made me shake my head, even knowing what it was didn’t make the film play any better the second time.

On a certain level the film suffers from the feeling that Maria Allred is showing off. Yes, she has enough talent to pretty much do everything related to the film and while I admire her ability, I just wish she had given us a film that was more focused on real characters and not on being a show reel. We don’t need the arty angles, the slow motion or the stilted dialog. What we need was real characters who speak and behave like real people and not ones that are in a movie, even if they are in a movie in a movie.

No, I don’t like his film. While clearly it is a labor of love and clearly shows Maria Allred has talent, it also shows she needs to work with a better writer and someone who can tell her the slow mo and certain other flourishes need to go.

Not worth you money or time, first second or anytime.

Now that I've written about it perhaps I can truly have it fade from my memory.
Posted by Steve Kopian at June 06, 2018

Email ThisBlogThis!Share to TwitterShare to FacebookShare to Pinterest
Labels: drama, not worth the effort