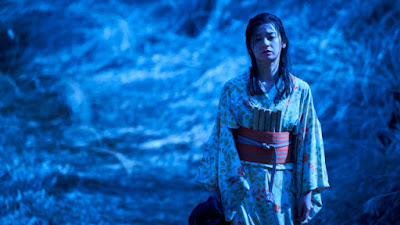 Dynamite Graffiti was the head scratching choice for the Opening Night film of this year’s New York Asian Film Festival. Feeling more like a film that would run at a certain cross town festival in an off year, this bio of a smut mogul just sort of lays there like a dead fish. It was the most toothless of opening night films that NYAFF has had.

To be fair I’ve seen the Dynamite Graffiti one and a half times. I originally started the film and got about an hour in and then abandoned it since it’s episodic way of covering publisher Akiera Suei‘s life was not coming together for me. After stomping around my house for a bit I decided to give it another go because I always felt the Opening Night film should be covered. Sadly the second time through I still didn’t care much.

Made with a knowing aloof attitude, one need only watch the opening sequence of the cop trying to see if he sees pubic hair in a magazine to see that, the film will often shift gears and try to take a more serious tone, such as some of the sequences with Suei's mother and early life( which are the best sequences). The gears grind and it comes off as disingenuous. For me this was like watching a bunch of frat boys be smutty before getting misty about their moms after drinking too much.

Frankly I didn’t care either time going through the film.

I have no idea why this film was chosen to open the festival this year when there are so many other better films.

A disappointment
Posted by Steve Kopian at June 29, 2018