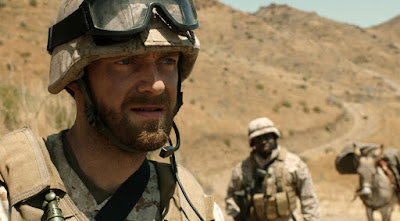 Two American soldiers run across the charred remains of a young girl. As things transpire the cycle of violence is revealed.

Disturbing and thought provoking film about the horrors of war and the evil that war unleashes is a neat little film. Carefully crafted for maximum impact the HAJJI is a film that haunts you and lingers on the fringes of your brain. I saw the film in a chain of several other shorts but found that I couldn't push it aside despite moving one. It hung with me and colored everything.

What makes the film stand out from being a simple war story is that the film is not just a film about the violence of soldiers on civilians but soldiers on each other as one soldier torments his partner by calling him Hajji. Clearly racism in the ranks isn't gone, even where the man you're belittling may be the one to save your life.

If you can catch HAJJI do so.

For more information and tickets to the Dances With Films screenings go here.
Posted by Steve Kopian at June 07, 2018

Email ThisBlogThis!Share to TwitterShare to FacebookShare to Pinterest
Labels: dances with films 2018, war